If you’re still running analog video and are looking for a top-tier goggle module, two usually come to mind as leading the pack. The reigning champ since 2018 is the ImmersionRC RapidFIRE. But recently, the TBS Fusion has re-released with upgraded hardware—and become a strong challenger for the title. Which is better?

Both include a long ribbon cable for extra power delivery and a small PCB to collect this from the head tracker bay of many Fat Shark goggles. The RapidFIRE’s extra board is larger and includes solder pads. The Fusion’s board is far smaller, and TBS includes a spare ribbon cable.

The Fusion includes a 90° SMA adapter for mounting one antenna upward, which is a very common scenario so this is a useful part to have.

The RapidFIRE includes stickers. The wide, thin stickers actually serve a purpose: if you run the ribbon cable externally along the front of your goggles, place the sticker over top of the cable to protect it. TBS recommends modding the goggle to run the cable internally instead.

Both modules fit a Dominator-style goggle module bay. These are found on the Fatshark Dominator V1, V2, V3, HD1, HD2, HD3, HDO, and HDO2. Other products exist with the same connection type, like ground stations, analog conversion kits for DJI goggles, and some goggles from other manufacturers. The Fat Shark Attitude has a similar, but not identical, module bay. The RapidFIRE is compatible with the Attitude V3 and V4, but some physical modification of the goggle case is needed to install the Fusion.

The modules are similarly designed, each with a 5-way joystick, a 128×64 OLED display screen, beeper, micro USB port, and two SMA antenna connectors. The differences in shape are largely irrelevant: The Fusion is a bit lighter (31g vs 80g), and when installed, the RapidFIRE sticks out from the goggles a small amount further. The Fusion includes LEDs that illuminate the antenna connectors.

The RapidFIRE’s power consumption is a bit better at 350mA, and it can operate under 300mA in a low-power mode where some features are disabled. The Fusion requires 380mA normally, which rises to 440mA if the WiFi is enabled. Both will require more power than the module bay can provide on most goggles except the HDO and HDO2. The Fusion will always require extra power if you wish to enable the WiFi capabilities, except on the HDO2. Getting more power requires modifying older goggles or running power from the head tracker bay through the included ribbon cables.

The most important feature is arguably the ability of the module to deliver good video. The TBS Fusion’s initial release had lesser hardware that did not perform quite as well as the RapidFIRE (but was still very good). However, the latest TBS hardware revision brings it essentially on par with the RapidFIRE. The story here is that these two modules are the best in the business. While each module does slightly better under very specific conditions, (first to lock, last to lose lock, first to drop color, more signal breakup, etc.,) it’s very difficult to call a winner on balance.

Both of these modules do sync pulse reconstruction. This is a technique to hold on to a video signal when an important component that tells screens where the top of the picture is has gone missing.

Beyond the capability to pick up signals are a host of features that make using the module easier or provide added value. Both modules include a method to find powered-on transmitters, check the current frequency usage, and find lost models.

To find powered-on models on the RapidFIRE, use the “Band Scan” feature. This will highlight channels which appear to be in use. You can select the one you want. The Fusion has two options for this: “Auto Lock” and “Mulitlock”. Auto lock is like an FM radio scan, advancing until it finds the next channel in use and stopping. Multilock scans the entire band first and then provides a list which you can move back and forth between as many times as you like without rescanning.

To check frequency usage on the RapidFIRE use the “Spectrum Analyzer”. This is the feature TBS calls “Band Scan”. In the TBS version you select your band plan and get a power reading for each channel within it. The RapidFIRE scans all frequencies regardless of the band plan, but will show where each channel exists as you change the band selection. This makes the RapidFIRE a bit more useful for understanding the whole picture, but the Fusion’s display updates much faster.

Both modules provide access to the “A”, “B”, “E”, “F”, “R”, and “L” bands (though RapidFIRE labels “F” as “I”). The RapidFIRE allows access to custom frequencies via its “Favorites” feature. After saving a channel into “Band X”, you can adjust the frequency of each channel up and down, slowly, by one MHz at a time. Immersion states this custom frequency functionality can help get the very most out of a VTx by tuning it forinaccurate transmitters, and so might be helpful for tuning the receiver for long range scenarios. The TBS Fusion doesn’t support custom frequencies with the module UI—though the can be set by external apps or Crossfire. (TBS claims tuning for inaccurate transmitters is impossible to do without expensive equipment that users won’t have at the field.) The “L” bands that go down to 5.3 GHz should be avoided as they are generally illegal to transmit on and 5.8GHz antennas are not tuned to use them.

Unique to the RapidFIRE is an option to disable channel changing from the joystick so that bumping the stick won’t cause problems, and the ability to disable incoming audio signals in order to converse power.

Unique to the Fusion is a “Lap Timer” feature that attempts to use the signal strength to determine when the transmitter passes close to the module. It’s a pretty basic system without great accuracy, but nice to have for practicing alone.

Immersion’s module is capable of communicating via SPI, and Immersion has released documentation allowing developers to access this capability. This means that anyone can develop a device that can control the module. Integrations include advanced goggle control such as in the ORQA, receiver arrays for live streaming, and lap timers.

The TBS Fusion includes a WiFi module that opens up a lot of additional capabilities. TBS is building integrations with other TBS products so that VTx and VRx channels can be synchronized, and to be able to control many other settings through the goggle module. TBS also promises other uses of the networking feature in the future. One planned future capability is a connection to RotorHazard timing systems to display race information to the pilot’s heads-up display in real time—such as the pilot’s race position, lap times, and split times. However, TBS runs a closed system that independent developers cannot access. 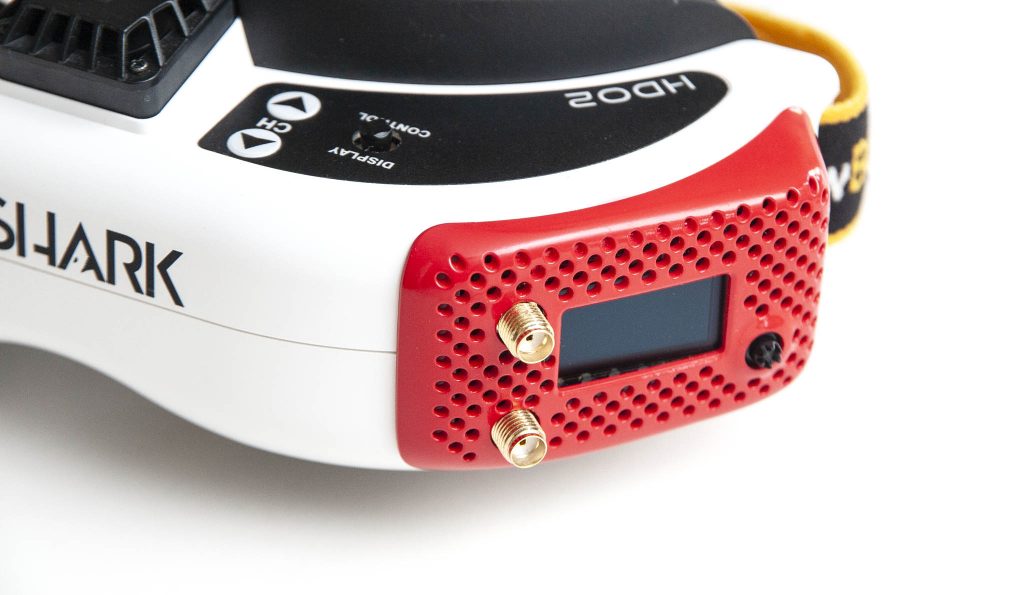 In my opinion, the menu for the RapidFIRE is a bit easier to understand and navigate than the Fusion. The Fusion’s menus tend to obfuscate the name of the current option with the current setting. For example, once you scroll onto the OSD option, you can’t see “OSD” anywhere on the screen anymore—only the setting itself, such as “TOP LEFT”. Users may forget what setting they are checking and have to scroll around to make it re-appear.

This doesn’t go fully in the RapidFIRE’s favor, though. The Fusion responds more quickly to channel changes and allows you to change both channel and band easily. While changing, you get an indication of signal strength, making it easy to locate and switch to friends’ feeds very quickly. The RapidFIRE changes bands and channels separately and there’s a short time lag between selecting and changing to the channel. It’s perfectly functional, but not as smooth. 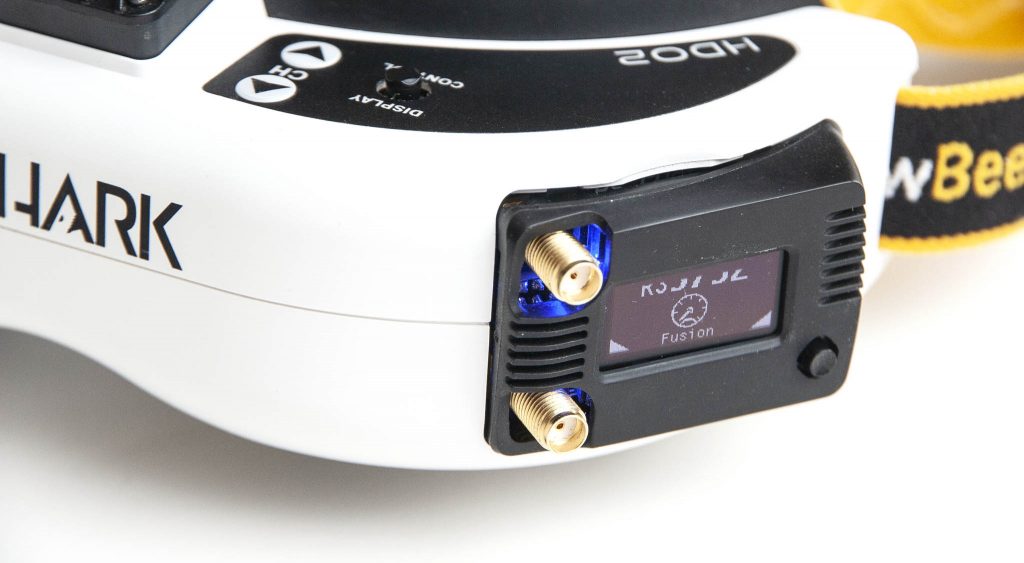 Both systems have been upgraded over their product lifetime, showing excellent support from the manufacturers. The RapidFIRE did not have the band scanner or lost model finder at release, and removed a ‘sync lock’ feature that was causing some users issues. The Fusion has undergone a hardware revision to improve its RF sensitivity and get a better picture. To be sure you have the upgraded “V2” hardware, look at the back of the module. If you see a yellow “B” sticker, then you have the V2. If not, you can upgrade the receiver section of the module for just $10 in order to get the improved performance.

Without a doubt, both of these modules offer top-tier performance. Each comes from a company with a history of quality as well as long term support with firmware and feature upgrades. If you stress your video link either behind walls, flying to its limit, or inside metal buildings, these are definitely worth investing in—keeping your video working could prevent a crash and save you the cost of your drone.

While the ImmersionRC RapidFIRE has been king since its release in 2018, it’s still priced at $150. The TBS Fusion is priced at $120—a significant savings. The Fusion brings nearly equal performance along with Crossfire system integration and WiFi connectivity. You won’t be upset with a RapidFIRE, but it’s hard to argue today that it’s still a better buy. At the time of this writing, the RapidFIRE’s advantage is in a much larger user base and successful history, not in features or performance.

If both options are too expensive, other modules exist at lower price points. The RapidFIRE and Fusion provide better video signal reception and picture than any of these lower cost modules, but these other options all offer great value for money.