Flowstate: One of the Best Simulators is…Free? 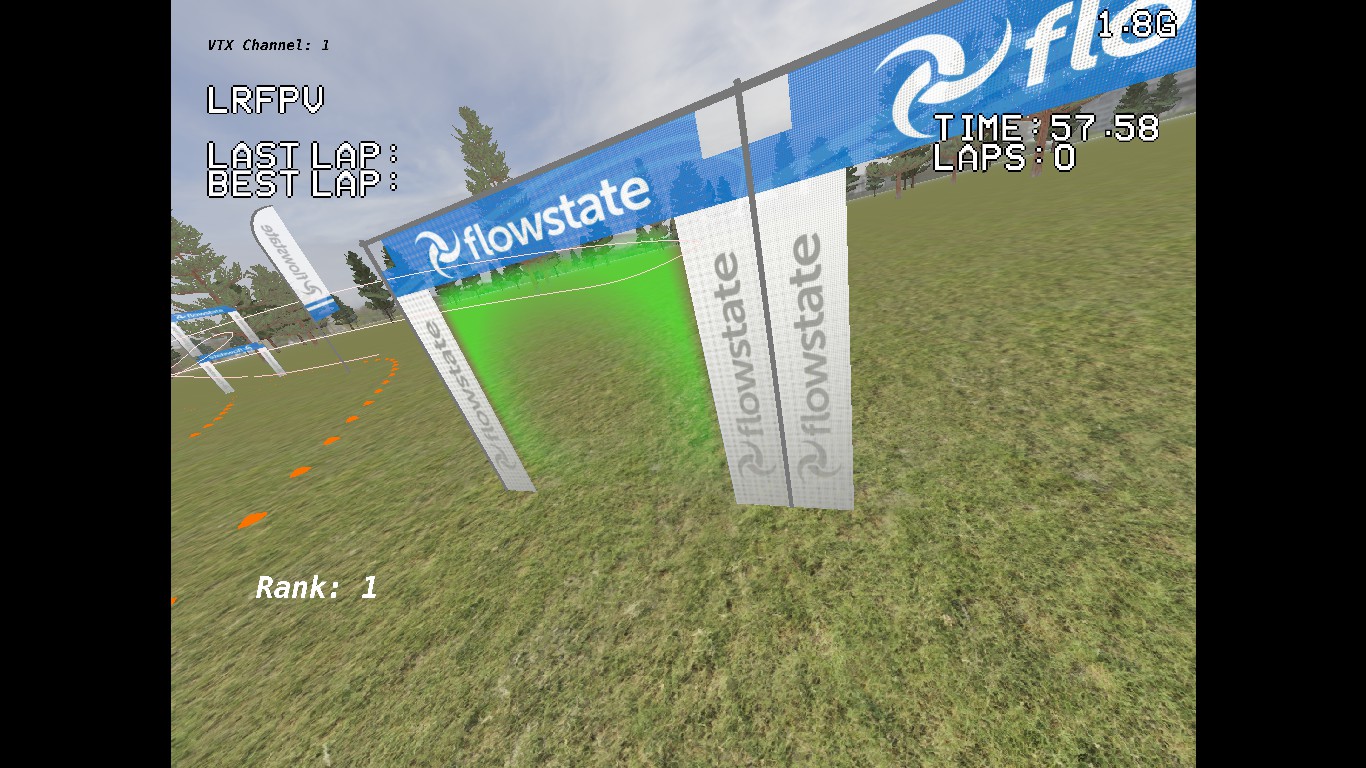 As cold weather encroaches, FPV pilots around the world flock to the simulators with the goal of keeping skills sharp, learning new tricks, and improving general racing/freestyle. While there are many simulators available, the best ones often cost money. However, one simulator, Flowstate, not only provides an excellent flight experience, but is also free!

Flowstate is an open-source simulator created by pilot Sky FPV. He wanted to design a simulator that had realistic physics and worked well on low-end machines to help people learn how to fly FPV racing drones.

In this article, we will conduct a general overview of this simulator, notable features, cover the system specs and setup that Flowstate runs on, and of course, compare it to other FPV simulators. 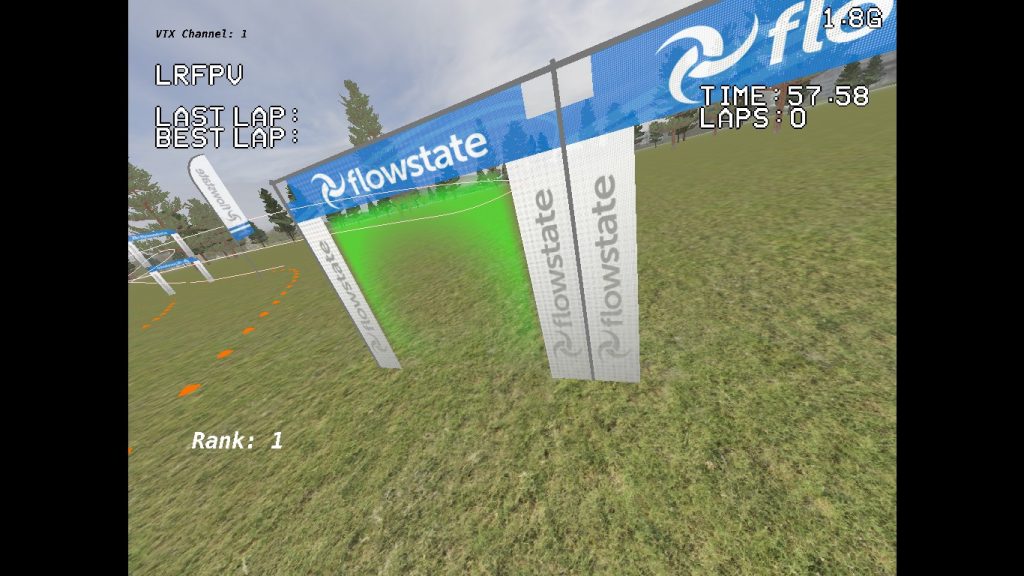 Upon opening Flowstate, you are greeted with a simple menu. If this is your first time using Flowstate, make sure to set up the controller and rates before flying. I used a Taranis QX7, and the simulator automatically detected and configured my controller. Absolutely no hassle! 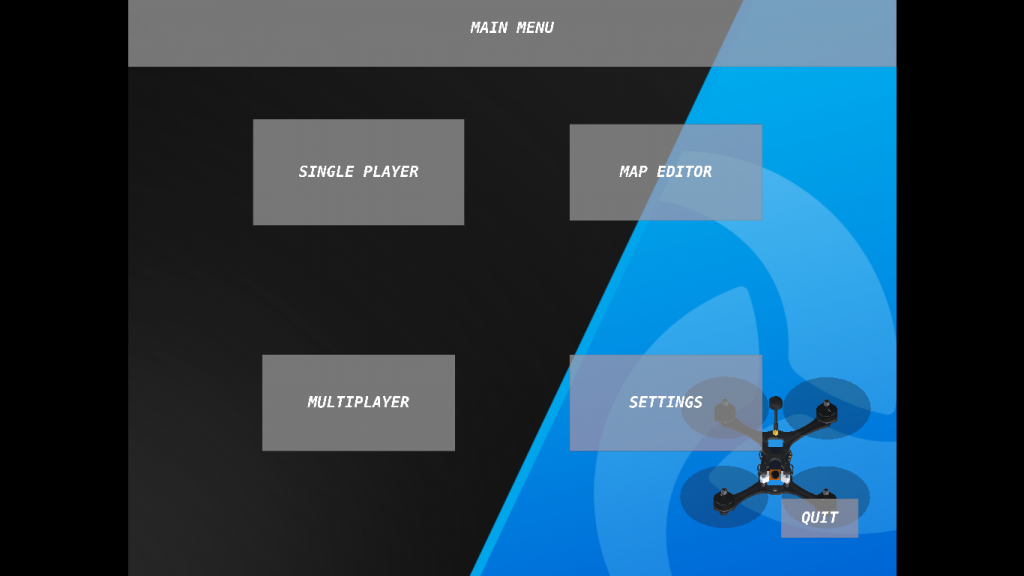 Next, the rate profile. Rates work a little bit differently in Flowstate than in other simulators. The RC Rate, Super Rate, and Expo are all scaled up by a factor of 100 in comparison to Betaflight. For example, if you fly with an RC Rate of 0.8 and a Super Rate of 0.7, these values would be 80 and 70 respectively in Flowstate. 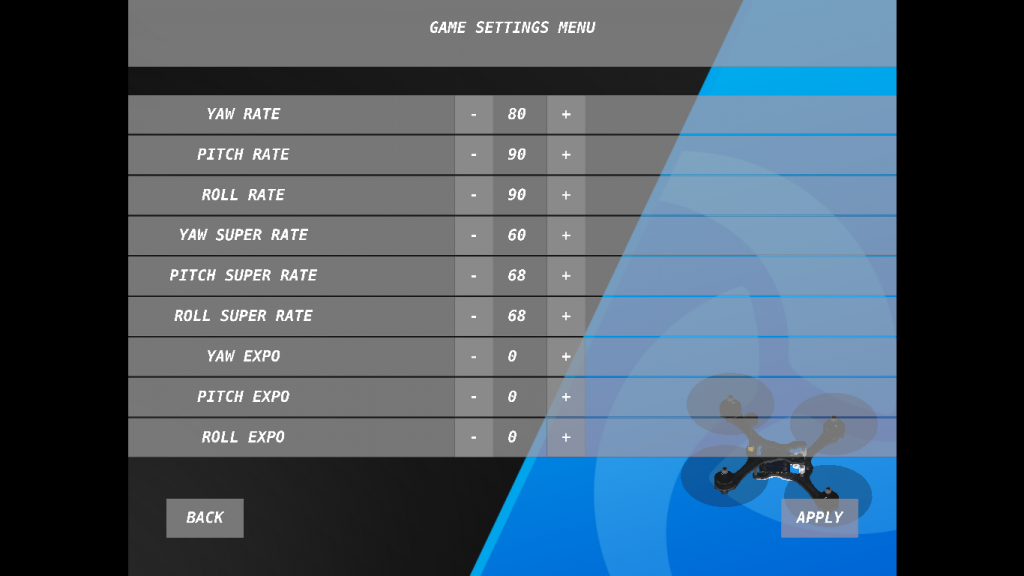 Single Player is very simple. Pick a track and you’re good to go! The race will automatically start with a five second countdown, so there is no need to worry about starting the race.

If you press Escape during single player, you are taken to a menu which allows you to go back to the main menu, restart the race, or change quad settings. One cool feature that Flowsate has here is the ability to change the simulator speed. By setting “Sim Speed Percent” to 50, the game runs at half-speed, allowing you to focus on flying tight lines and smoother movement.

The physics of the quad can also be changed, although I would recommend leaving them at default if you are just starting out. More advanced pilots may want to increase the thrust and decrease the weight and drag to suit what feels best to them. 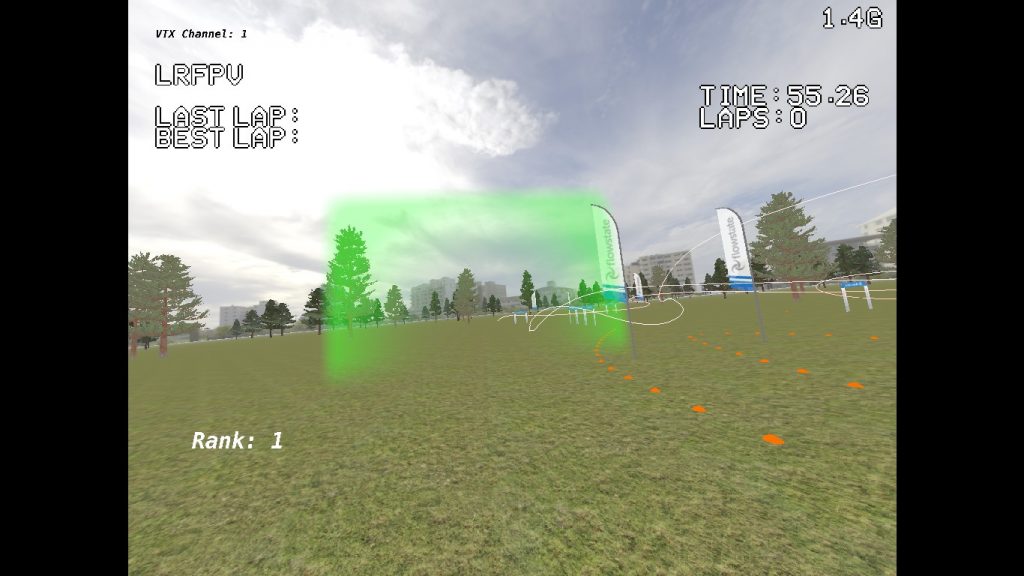 Multiplayer works quite similarly to single player. Instead of tracks though, there are five different servers to choose from, and other people can join your server. This could work if there is an FPV club nearby, and the pilots want to practice together without having each person purchase a simulator and high-end gaming computer setup.

The map editor is a standard FPV track editor, and has a similar feel to other simulators out there, such as FPV Air 2 and Velocidrone. I really like how the color of the gate’s flying area indicates the direction of flight. Green is forwards, while red is the back side of the gate. The brightly-tiled ground makes placing gates easier, since it is easy to organize and tell how far apart each gate is from each other. 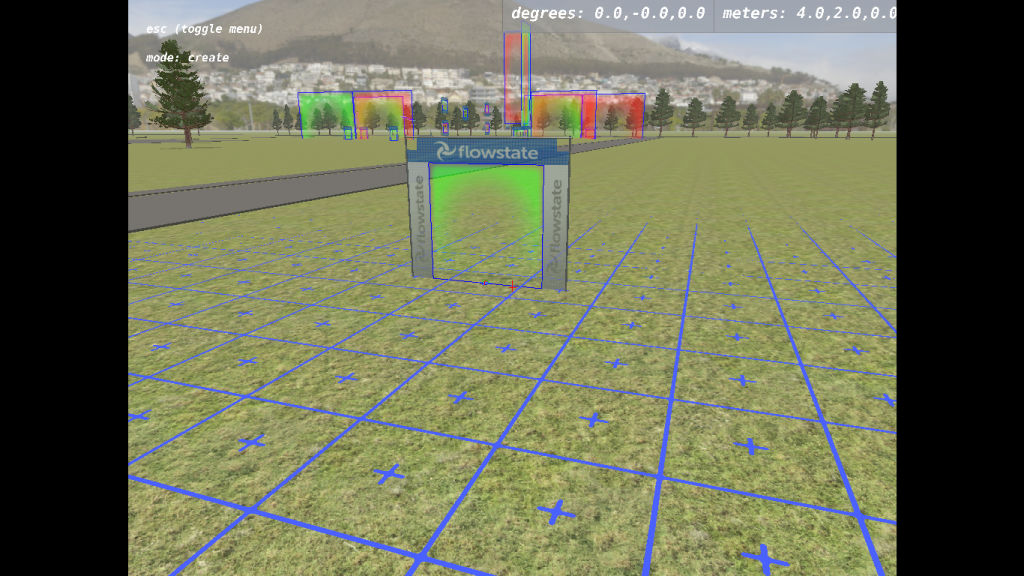 The first thing I noticed when I flew Flowstate was how well it “felt”. There was no adjusting to the “feel” of the simulator’s physics, no practice laps to get locked in, I just throttled up and flew just as if I were flying my quad in real life. This surprised me quite a bit, because usually, it takes me a few laps or so to get familiar with the simulator after flying in real life (IRL). Conversely, when I come off the simulator and fly IRL, it always takes me a few packs to get comfortable with the quad again. This did not happen at all with Flowstate.

The color-coded gate indicators again are very helpful. For someone who is not familiar with a track, these large, bright indicators can greatly aid in course memorization, flying tighter lines, and in general, provide an easier flight experience for beginners.

Probably the most important part that this simulator has to offer is the variety of tracks. There are 29 different tracks currently, ranging from broad and large, to tight and technical. Some of the more notable ones are listed below:

This can be a perfect tool for someone who is interested or looking to practice official MultiGP tracks but does not have the space, time, or resources to fly in in real life. 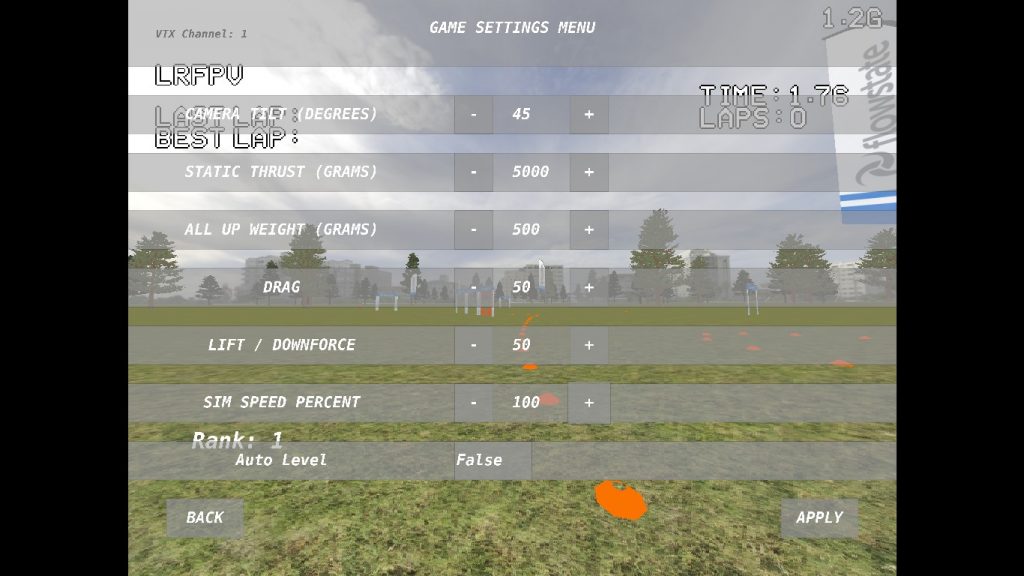 An often overlooked aspect of FPV simulators, the computer setup can drastically affect the performance and overall flight experience. For many simulators, a decent graphics card and CPU along with a hefty amount of RAM is often needed in order to achieve a smooth flight experience. Depending on your skill level, a 144 Hz monitor may also be needed, adding to the extra cost of a simulator setup.

Luckily, Flowstate was almost designed to run on low-end machines. I tested Flowstate with the following PC setup and could not find any discernible hiccup, lag spike, or strain on the system:

I tested Flowstate on a much faster system and could not tell any performance difference between my old computer and the faster one: 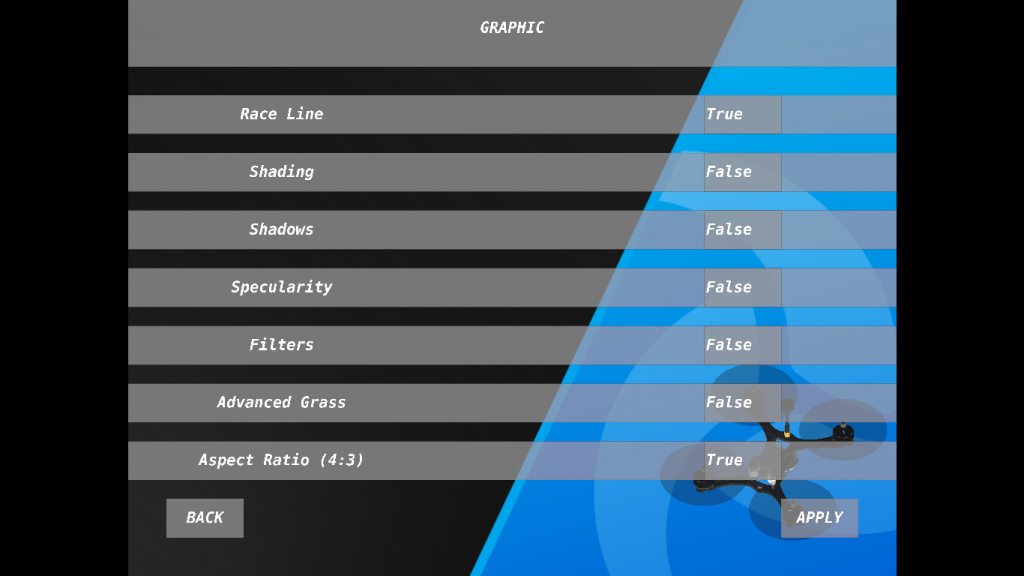 Just to give some context of the performance, by turning down the graphics in Flowstate, I was able to get over 1000 FPS on my R7 250, a card which is 580% slower than the GTX 1650 Super, a popular mid-range graphics card. Of course, this 1000 FPS is not displayed, since the monitor is only 60 Hz, but this means that there is a very low GPU latency, making the flight experience just that much more realistic. To further the point that Flowstate runs well on low-end machines, my AMD R7 250 graphics card was working with less than a 50% load while running Flowstate on low graphics settings.

If you have a laptop or older PC, then Flowstate will most likely run quite decently as long as you turn down some of the graphics.

While Flowstate has much to offer, there are still some things that this simulator is lacking.

The menu systems can sometimes be buggy, requiring the user to hover the mouse multiple times to select an option from the menu. The same can be said for many of the buttons in the game. However, once you have your optimal settings dialed in, it is not that big of a deal.

The graphics, although they are nice, could look better. However, this simulator does run very well on low-end machines, so in a way, form follows function here.

I experienced this one bug where if I crashed into a gate, the game would freeze and I would have to restart the race to keep flying. Normally, when you crash, you can kind of maneuver the quad around on the ground or obstacle to get back up, but sometimes the game will freeze. Again, not a deal breaker but something to consider.

The menu is simplistic with no frills whatsoever. Although the UI could be more polished, it gets the job done at the end of the day.

Another area with room for improvement is documentation. There are many hidden shortcuts in this simulator that allow you to do things like view each separate lap’s footage and toggle through each frame of your race. Some more detailed instructions on accessing these shortcuts should be mentioned in the game’s menu, as a normal user would have to push random keys to see what they did. (Hint, try the number keys!)

However, none of these shortcomings are deal breakers for Flowstate. The overall flight experience is very good nevertheless. 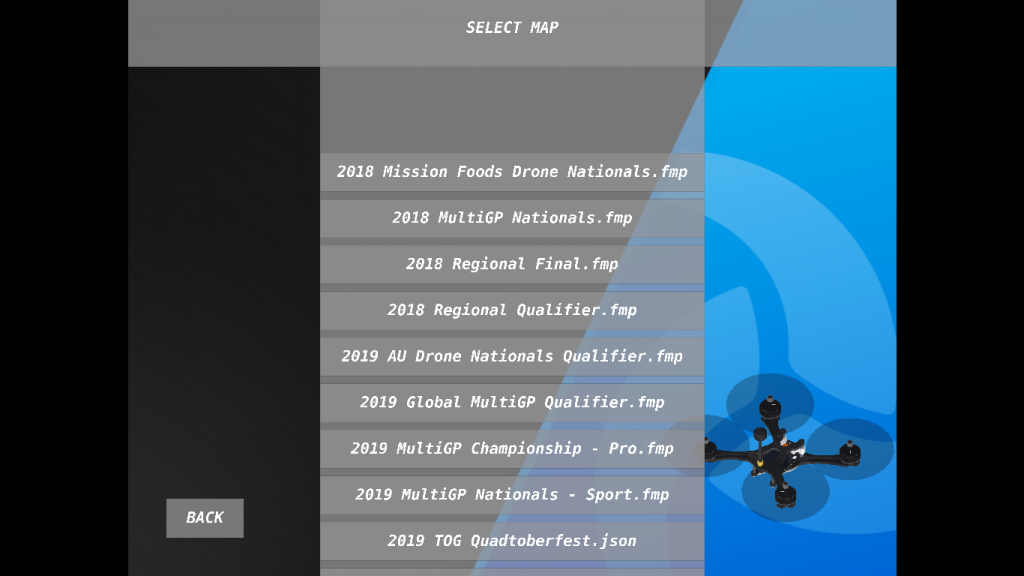 Velocidrone is widely considered “the best” FPV simulator out there. It is hard to argue that claim, given the huge community, realistic flight physics, and relatively cheap price (~$20 USD). Although Velocidrone will run on low-end machines, a gaming setup is preferred due to the competitive nature of Velocidrone. There are weekly races, competitions, and prizes set up through the Velocidrone Discord channel, and the competition can be very stiff. When you have the world’s fastest FPV pilots all competing, the stakes can be very high indeed!

Flowstate would be the better choice over Velocidrone for someone who does not necessarily have a fast gaming computer and 144 Hz monitor. Also, Flowstate is great for people who are just getting into FPV racing and want to “test out the waters” before purchasing a simulator or flying equipment. In the end though, I think Velocidrone is a better choice if you have a high-end PC and are interested in competitive simulator racing.

I reviewed this simulator a while ago, and found it to be one of my personal favorites. FPV Air 2 is only $5 on Steam (although it ends up being ~ $20 with all the add-on DLC packs), runs well on low-end machines, and delivers a very realistic flight experience. The UI is very polished and intuitive. The physics are also more customizable in comparison to Flowstate’s physics. However, Flowstate has a greater variety of “official” tracks from different racing leagues. While FPV Air 2 does have some official tracks, most of them are custom courses, exclusive to FPV Air 2. I would say that FPV Air 2 and Flowstate are just about tied in regards to flight realism, but FPV Air 2 wins out purely because of the more polished user experience.

DRL is another simulator that can get highly competitive. The game is centered around the Racer 4 quad, which is the spec racing machine for DRL. There is a huge selection of tracks and in-depth physics customization. If you are looking into a “fun” simulator with cool tracks and scenery, and physics that have been designed around the DRL Racer 4, I would recommend DRL over Flowstate. If you are looking to fly real-life races with leagues such as MultiGP, I would recommend Flowstate because it seems to be more focused towards the 5-inch racer pilot.

Liftoff has been around for some time, and is focused on FPV freestyle more than anything. There are many unique sceneries, from bando buildings to nighttime farm fields. You get to customize and build different quads in the simulator, explore beautiful sceneries, and practice freestyle tricks. There are racing modes available, but the experience of Liftoff is catered to the freestyle pilot. If you fly freestyle, then Liftoff is the simulator for you. However, if you are more of a racer, I would choose either Velocidrone, FPV Air 2, or Flowstate. 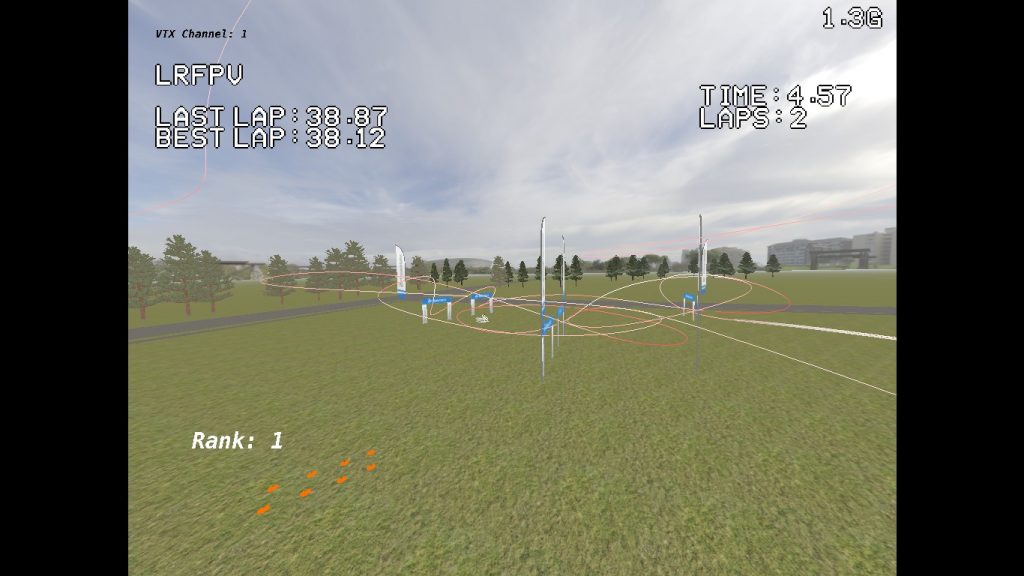 Overall, Flowstate is a rather unique simulator that is often overlooked amongst the many other great FPV simulators out there. Flowstate is the simulator for you if you have a low-end machine, want to learn how to fly a FPV racing drone, or just simply don’t want to pay a single dollar towards a simulator.

Even if you are happy flying Velocidrone or Liftoff, I would strongly recommend checking out Flowstate. It’s free, easy to set up, and delivers an excellent flight experience. In fact, an FPV group has even made Flowstate their official simulator!

You can get Flowstate on Steam or the project may be found on Github.