We have all seen those very cool FPV videos on YouTube, whether it’s insane cinematics by Johnny FPV, flowy freestyle by Le Drib, or very fast racing by Minchan Kim, and wondered how we could post our own footage on Youtube. DaVinci Resolve is a free, easy to use, professional video editor which aims to compete with the very best of video editing software. With the likes of Adobe Premiere Pro, iMovie, Filmora, already on the market, how does DaVinci Resolve stack up?

Upon first inspection, the video just looks like a normal video editor. There is a screen for all your projects where there is also a button to start a new project. When you start a new project, the editor opens up and takes you to an import media page. There are other buttons below that take you to a cut tab, edit tab, color tab, FX tab, and deliver tab. There are also many other buttons that make the editor look very complicated to use. A lot of functions for a free video editor.

Even though there are many buttons and sliders on the editor screen, the screen still looks clean and modern. The first time I tried to use DaVinci resolve, it took some playing around a bit for me to get the feel of it. However, most buttons are self-explanatory, such as the cut, and dragging of video clips. I could not believe a free video editor would have so many functions. I would still recommend tutorials, just like any other video editor or program, to learn tips and tricks, such as shortcuts. I will include some tutorials below this article. 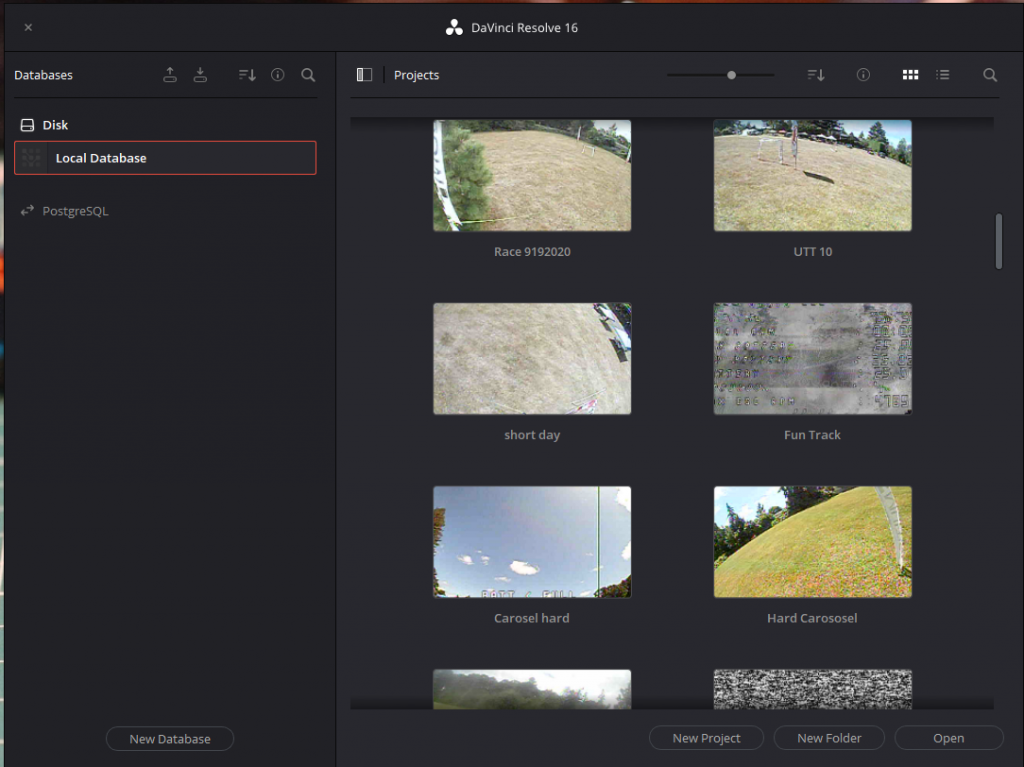 Here are the specifications of the computer I run DaVinci Resolve on:

DaVinci Resolve requires at least a mid-tier computer to run smoothly. I have been running the editor on my mid-low tier computer, and while simple editing such as adding music to videos, and cutting/pasting video is fine, when you want to add transitions, color grade, and/or other graphics-heavy effects, my computer starts to lag. The lag is bearable though, but when the editing gets intense, such as masking, keying frames, and speeding and slowing, the editor may freeze.

The first step to any video is to import your files, flight footage, and music. DaVinci Resolve makes this step super easy, taking you to an import tab right as you open the editor. In this tab, you can import all the footage you need to make the video in an easy manner. There is a bar on the left side of the screen with your video files, where you can drag and drop into the bottom part of your screen which stores what videos you are going to use. 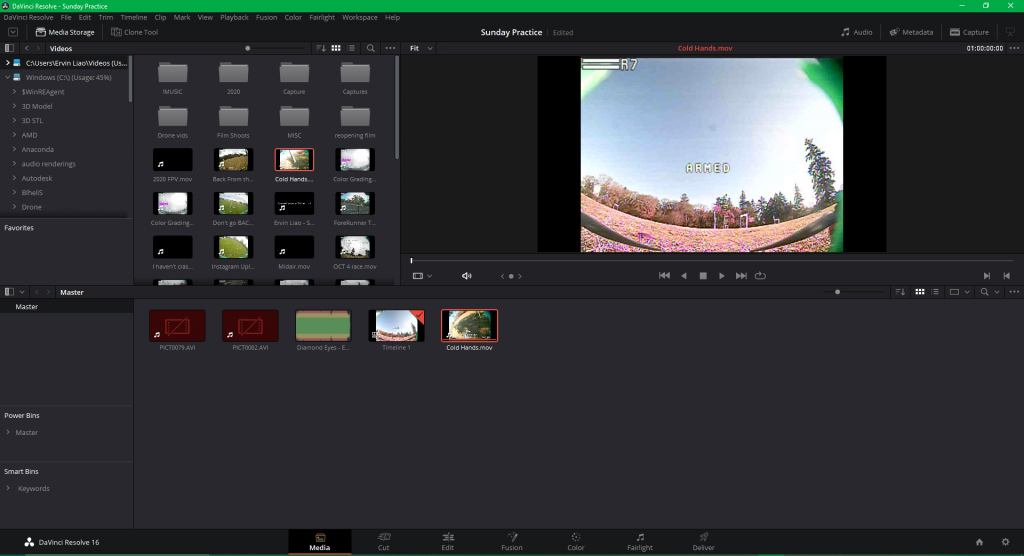 The best part about the import tab, compared to other editors, is that you can watch video files without importing them into the edit file. When you click on a video file as shown in the photo below, the video plays on a small screen to the right of the import video box.

One downside though, is that you cannot import music directly from the import tab. You need to go to the “file” dropdown at the very top of the editor and press “import file” and find your music file in order to import your music clips. This is a hassle, but once you get used to it, it is very easy. You also have to make sure to import your videos first before your music, or else the frames per second of the video will get messed up.

Editing the video is just like almost any other video editor, and it takes place in the edit tab within the software. There are buttons for cutting video, and other functions such as changing the volume of the music. There are also other buttons, such as preset video and audio effects. There are also many text features for adding titles or captions to your video. For drone pilots, this is probably the only part of the editor we need, since we are not doing any fancy transitions and/or effects.

Editing the video itself is also very easy, and mostly self-explanatory. Normal functions, like cutting video, and volume settings are easy to understand and use. Most of the time, this is all we need to edit a video. More complicated settings such as text and resizing clips are also very easy to learn. Overall, simple editing in DaVinci Resolve is very easy and takes very little time to learn. 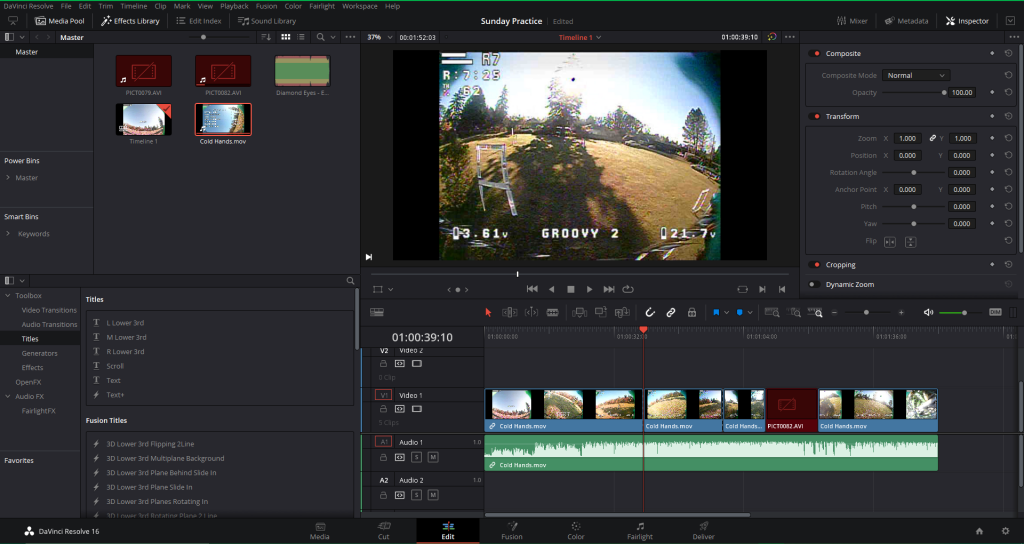 Other Parts of the Editor

DaVinci Resolve has more to offer than just simple editing commands. There are other tabs in the editor, color, fusion, audio, that can do way more fun things. In the color tab, you can color grade your clips. This is a great tool if you need color-correction for your GoPro videos. On the other hand, the fusion tab lets you create insane effects and transitions, while the audio tab lets you mix audio. Finally, there is also a stabilization tool in the editor. However, the quality of stabilization is not good, and you may need to play with settings to get it right. 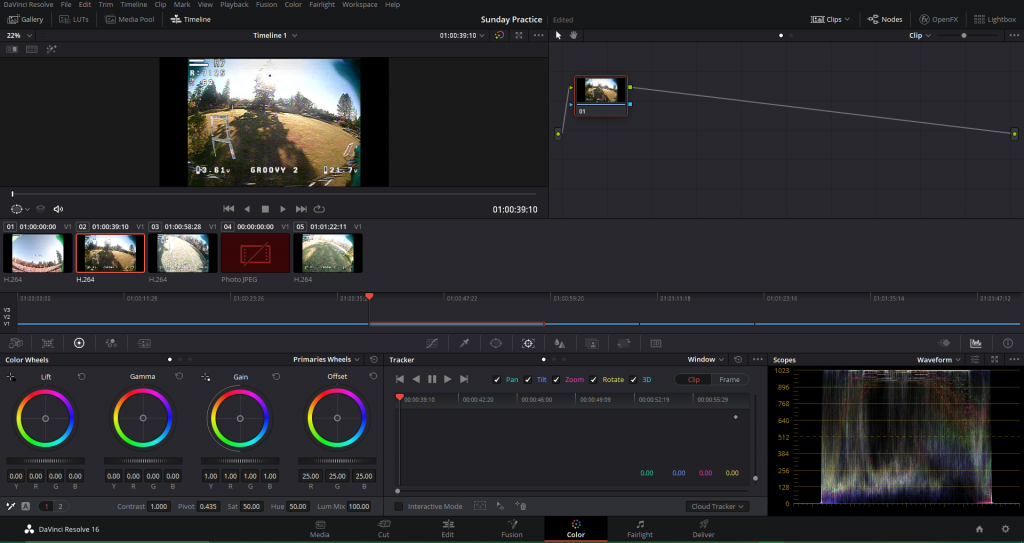 I myself have only used the edit and color tab. The audio tab I have never touched, and I rarely use the fusion tab unless I am trying to learn a new transition or another special effect. If there is some video editing effect you want to try, just search it up on YouTube and you will likely find a good tutorial. The various functions other than just simple editing commands shows how powerful DaVinci Resolve is.

On the bottom right-hand corner of the screen, there is a delivery tab for exporting your finished video. Exporting is really easy through this tab in DaVinci Resolve. It only takes a few clicks, and your video will start to export into your hard drive, ready for posting on Youtube. 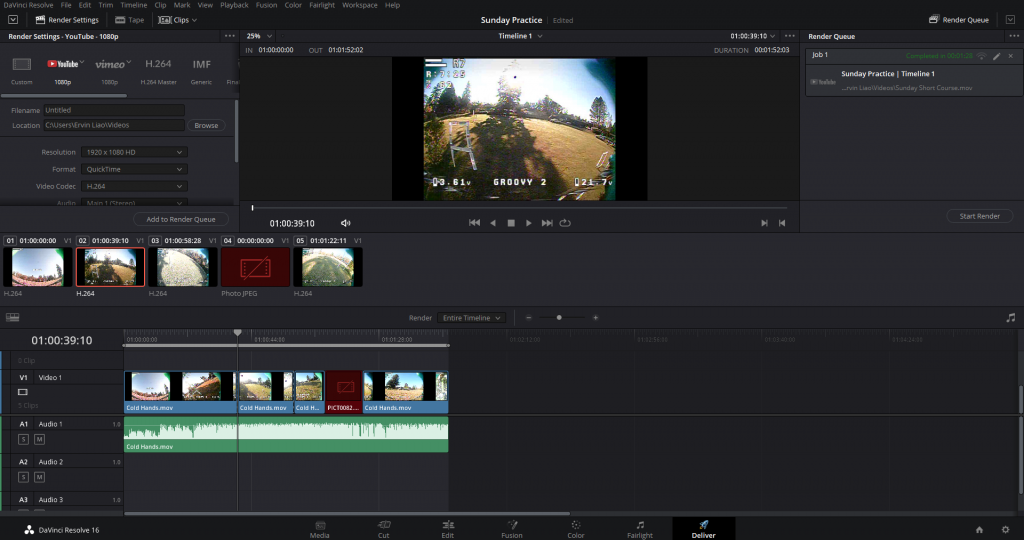 Here is a quick video on how to export your video for YouTube if you are stuck.

The single biggest reason I would recommend this video editor over any other video editor is because of its price. It’s free! Not only is this video editor free, but it also has many functions that paid professional video editors to have, and has all the functions a hobbyist/drone pilot will ever need (more on this below). I have yet to reach the limits of the free version. However, there is a paid version, which is $300, which most people probably won’t need.

Compared to its biggest competitor, Adobe Premiere Pro, which costs almost $300 a year, DaVinci resolve is the better choice in terms of price and still has comparable functionality compared to Premiere Pro. Compared to other free video editors, such as WeVideo, Lightworks, or iMovie(Mac only), Resolve has way more functions and can do way more.

Comparison with other Video Editors

I know what you’re thinking. Should I get DaVinci Resolve as a beginner compared to other editors? The short answer is YES! For the price and the functionality, Resolve is a must. However, if you have already edited with other programs already, and already have a smooth workflow, I would stick with the current video editor you have unless it is a monthly subscription you want to stop paying for.

However, if you do not have a computer capable of running DaVinci Resolve, and/or don’t need special effects and other functions, WeVideo would be the way to go, since it does not need a high-end computer, and it is browser-based. I would still recommend going with Resolve if you are able to since it is fun to learn about effects such as color-grading and complex transitions, compared to only putting music to video. Lightworks is another free video editor, but the free version has only limited functions compared to DaVinci Resolve.

Recommendations While Using the Editor

My biggest recommendation if you decide to use DaVinci Resolve is to learn keyboard shortcuts. This will make your workflow way smoother, and allow you to edit and post videos quicker.

Here is an awesome tutorial for DaVinci Resolve.

In conclusion, DaVinci Resolve, in my opinion, is the best editor for FPV pilots. Not only is it free, but it also has more functions than a normal hobbyist needs. While using the editor, you may only use a few tools out of the hundreds that are in the editor. When you want to learn more about video editing, all the other tools are there for you, compared to other free editors which have limits. So if your computer is capable of running DaVinci Resolve, go ahead and get it!