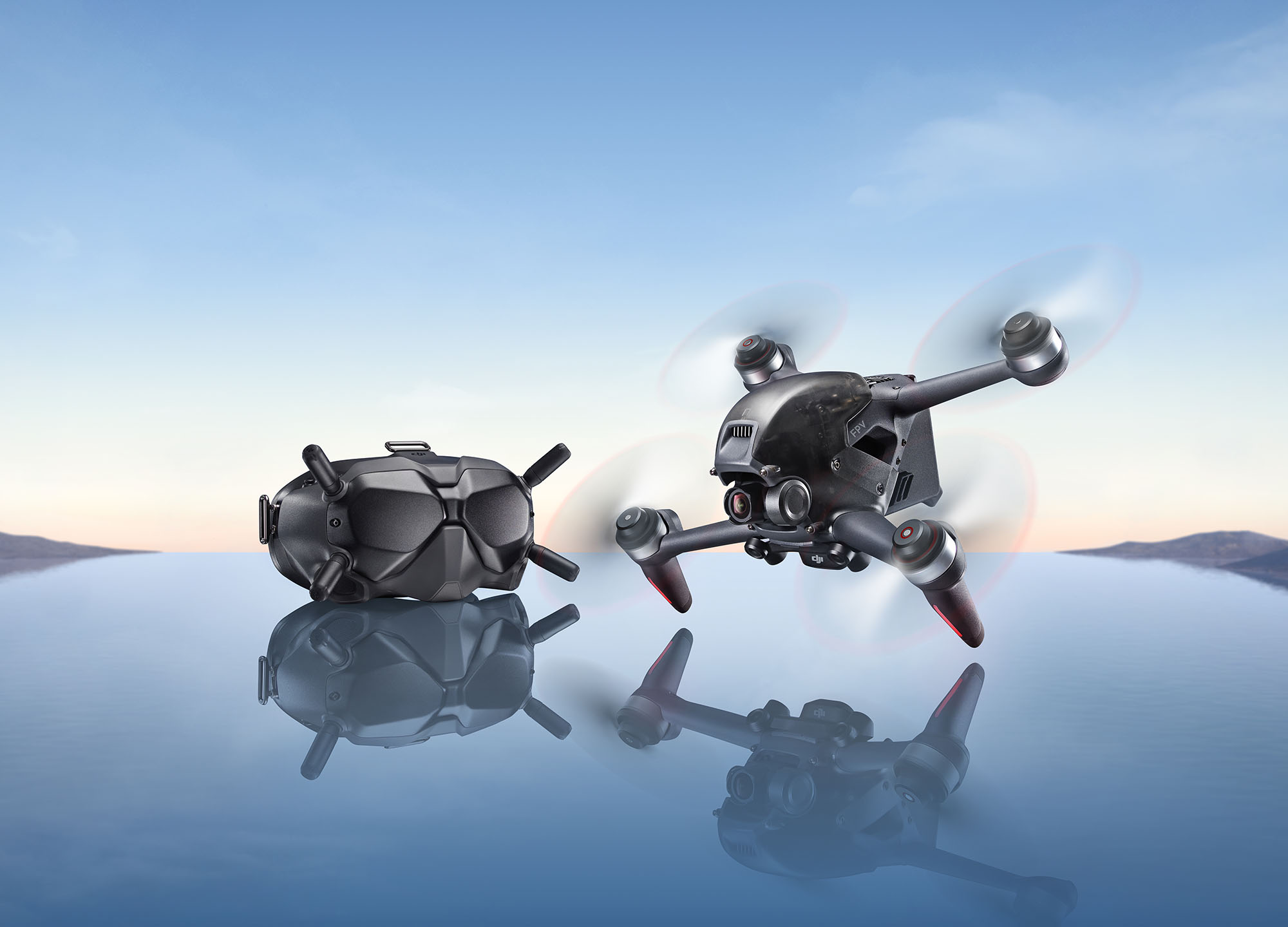 DJI FPV is a new system from DJI that offers an immersive cinematic experience. With this new system, DJI has taken its expertise in image quality and user experience, and incorporated handling and acrobatic capabilities from hobbyist freestyle drones. The result is a video and camera platform that’s uniquely positioned in the market for filming action, and a drone that’s more fun to fly than any DJI drone that has come before it.

The main components of the system are the DJI FPV Drone, DJI FPV Remote Controller 2, and DJI FPV Goggles V2. For the Drone itself you’ll get a battery, propellers, gimbal protector, and top shell. The goggles ship with their antennas, a battery, USB-C power cable, head strap, and foam padding. You’ll also get an AC adapter and cable, a USB-C data cable, and a USB-C OTG cable for connecting with your phone or tablet. 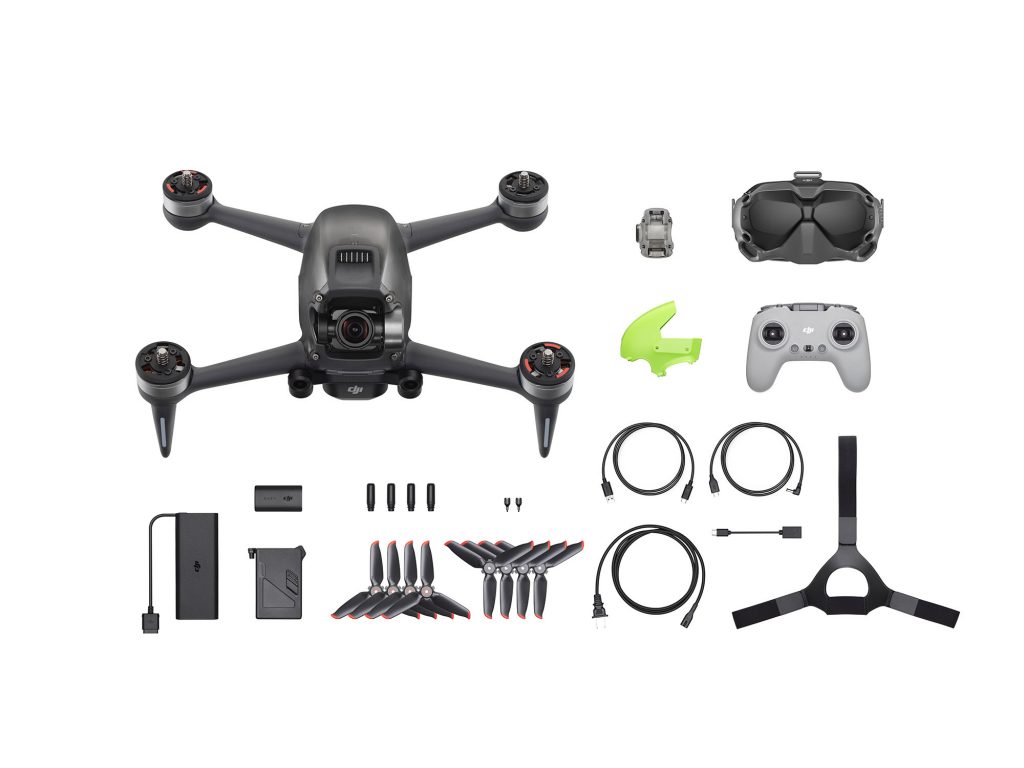 DJI has always been at the forefront of image quality on drones, and the DJI FPV system is no different. You won’t find a better imaging system on any drone with similar capabilities. There are two sets of specs around video: what’s transmitted back to the goggles and what’s recorded directly on board. The imaging camera has a wide 142° view. When shooting at 50 or 100FPS, the view widens to 150°.

HD Digital FPV provides a real-time view of the flight as it happens, with very little latency. This is the first time DJI has shipped this kind of immersive experience on one of its own drones. The DJI FPV Goggles V2 are the current top-of-the-line offering in HD FPV. They receive an HD video transmission up to 810P at 60FPS in high-quality mode, or 120FPS in low-latency mode. You can take a look at previous reviews of the goggles for more detail, as in most ways it is identical to the previous version except for the ability to communicate over 2.4GHz (making it possible to use in more geographic locations). 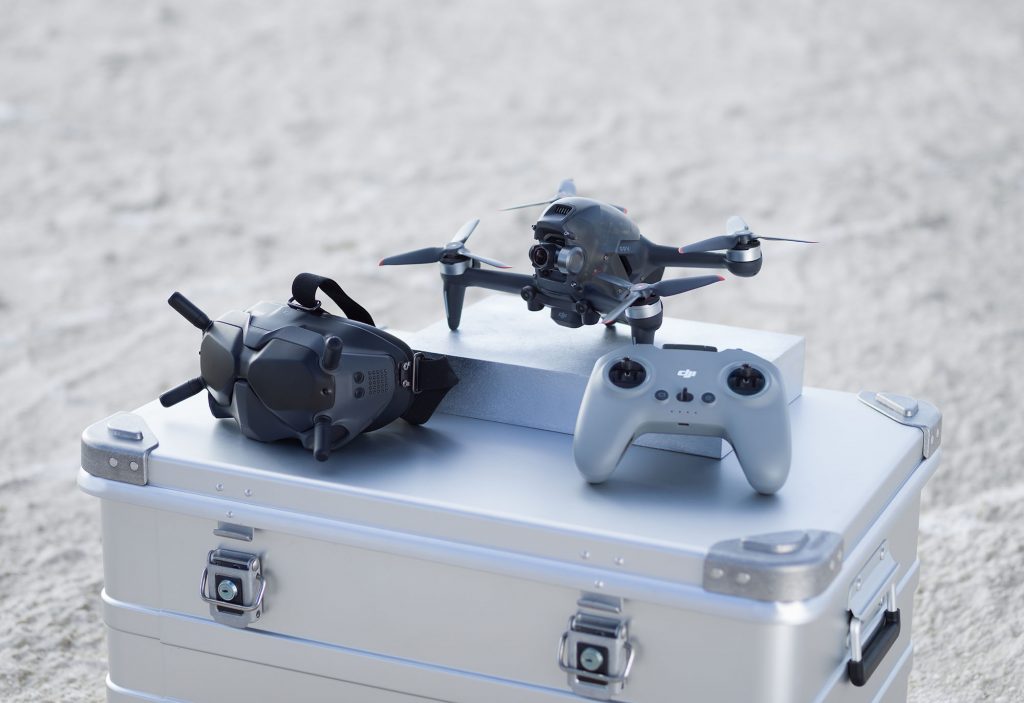 Users of previous DJI drones can make an effortless transition to DJI FPV by flying it in “Normal” mode. This is a typical GPS-assisted mode that’s easy to control and enables smooth flight. It’s also the most limited, with a maximum attitude angle of 25° and maximum flight speed of 15m/s (~33mph). Once mastered, users can switch to “Sport” mode to increase the maximum flight speed to 27m/s (~60mph) and double the ascent and descent rates. Sport mode will be a big step up for many pilots used to flying smaller DJI quadcopters.

For the deeply experienced pilot, DJI FPV has also included a “Manual” mode the disables most flight assists and hands direct control to the operator, just like a freestyle drone would have. This enables amazing maneuverability—but also carries considerable risk. So much so that Manual mode is disabled by default and must be enabled through the goggle menu. In addition, manual mode will still limit the maximum attitude of the craft and prevent inverted maneuvers like flips and rolls. A separate goggle menu setting can remove this second attitude limiter and unlock the craft’s full potential.

For freestyle flight, it’s best to have a throttle stick that does not recenter itself when you let go. DJI has provided a method to disable the automatic recentering on the radio controller by adjusting a screw at the back. 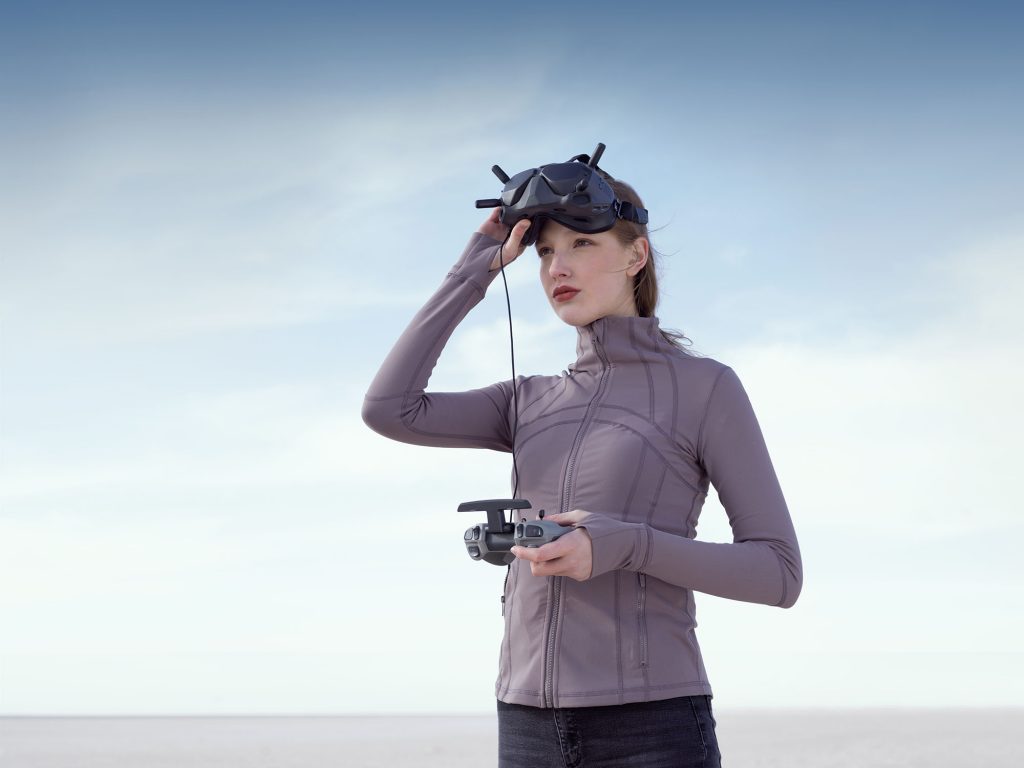 Unlike with most hobby-grade drone equipment, usability of the full system is a top priority. DJI has taken great care to ensure the freestyle-like experience is also seamless and easy to access for all users. Some of the expected usability (and safety) features include lighting, smart return-to-home, low battery return-to-home, and both forward- and downward-facing obstacle avoidance sensors. DJI has also brought a few new tricks to the table.

Freestyle is difficult and intimidating to learn. The controls are very powerful and allow vast freedom of movement, but it is very easy to crash until you are familiar and comfortable. Crashes can even be dangerous and costly. The DJI FPV drone mitigates the risk with a panic button. When you activate it, the drone goes into full stabilization mode to set itself upright and hover in place.

Instead of the traditional two-stick control, you can instead fly the DJI FPV drone with a one-handed motion-sensing remote. Details on the motion controller are still forthcoming, but this device could be revolutionize the way pilots interact with the drone. The promise is a natural and intuitive connection between drone and operator that makes it much easier to learn and control than the traditional systems that came before. 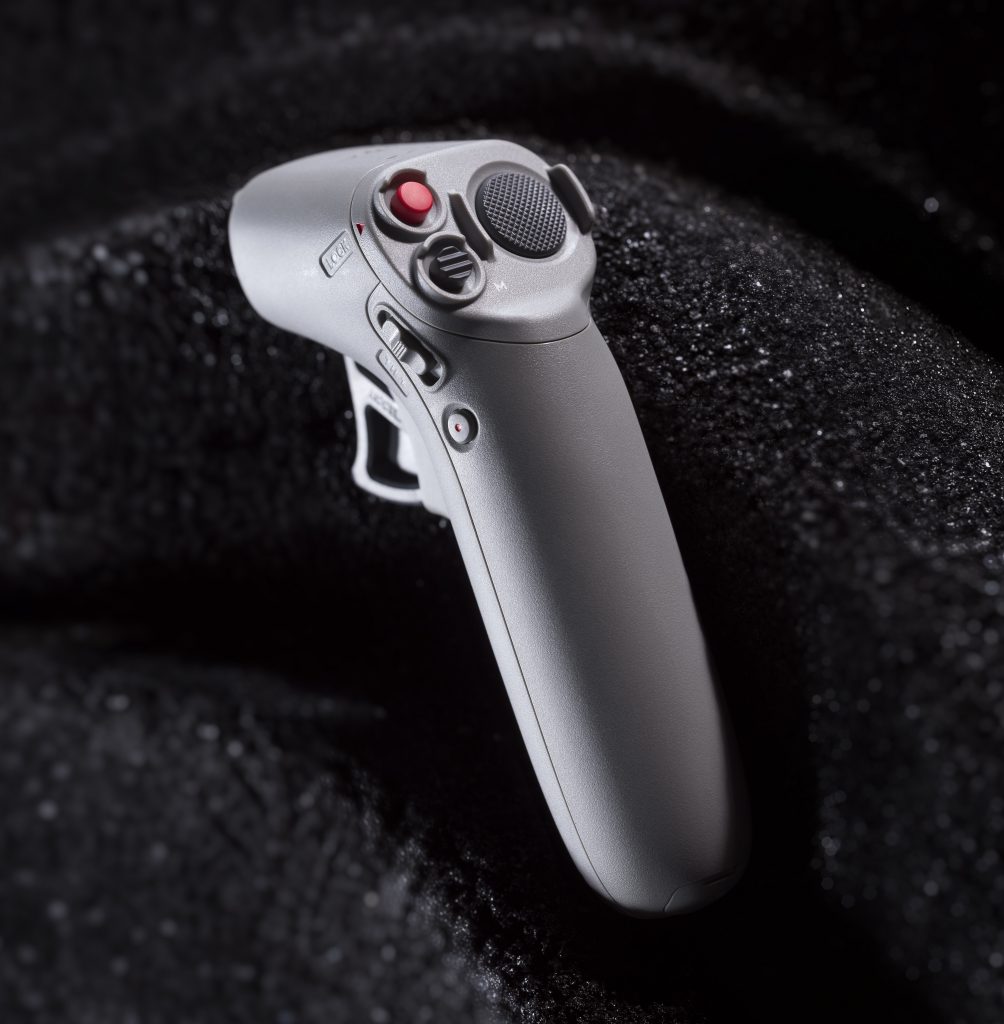 With a 20-minute flight time and speeds up to 60mph, the DJI FPV drone is no slouch—but it won’t come as a surprise to long-time hobbyists that the drone is a bit more tame than quadcopters built for racing or freestyle. Low-pitch 5328 propellers are very efficient but aren’t going to provide the raw power that many enthusiasts are used to. Carrying nearly 800g of weight will make the drone drift and slide through corners instead of providing the locked-in feel that dedicated racers look for.

But the DJI FPV Drone doesn’t take aim at the highly-tuned purpose-built hobbyist drone segment. Instead, it will excel at image quality and usability while providing a great flight experience. The barrier to entry for racing and freestyle has historically been extremely high, forcing pilots to learn control systems, understand radio frequency usage, navigate confusing manufacturer standards, and much more—not to forget the difficulty of learning muscle memory needed for direct control of such complicated craft. But the DJI FPV Drone does away with all of that. It’s a charge-and-fly product which can give the operator a taste of true freestyle handling. 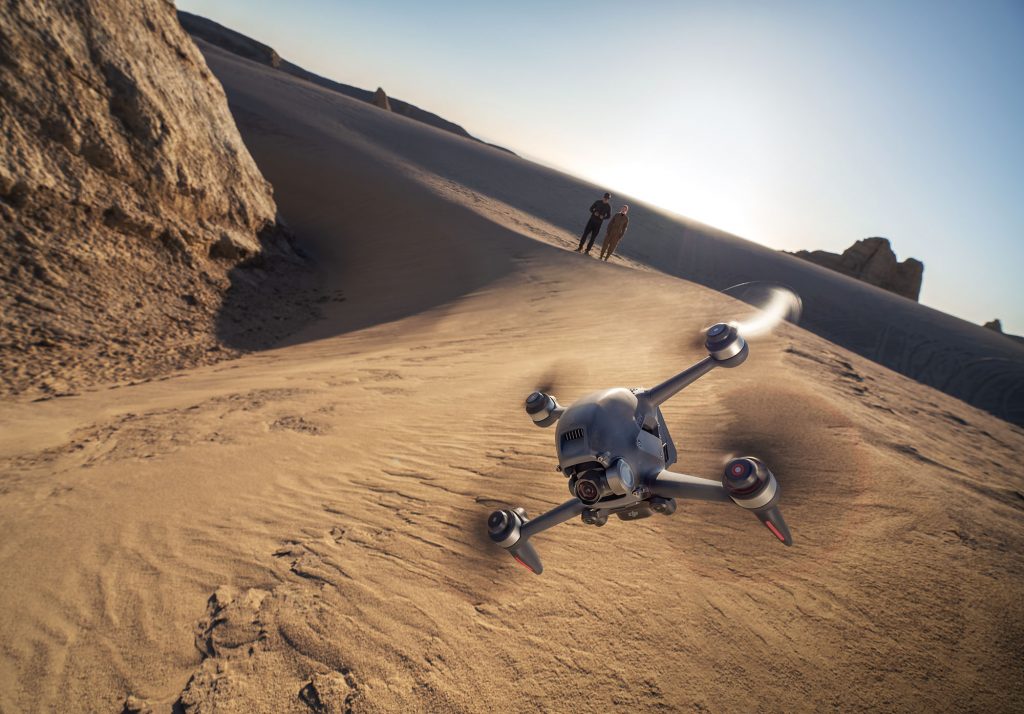 The DJI FPV Drone incorporates ADS-B, receiving information from nearby aircraft and relaying it to the goggle OSD for the pilot. And with its more nimble handling, it’s inevitable that some pilots will crash—so many parts like the landing gear, gimbal, and top shell are replaceable.

The DJI FPV Drone is an exciting and unique entry into the market, as the system is much more agile and sporty than anything else that’s come out of Shenzhen. While freestyle and racing enthusiasts won’t find it quite fast or agile enough to take out on the racetrack or bash around a bando, that kind of performance means sacrificing usability—which the DJI system does not do. So what does it excel at? Action footage for sports and fast-moving subjects would be a prime candidate. Cinematic shots that require the finesse of manual flight will be a big draw. And the drone pilot who hasn’t sunk years into building their own aircraft and honing freestyle flight skills will find an excellent entry point to exploring new viewpoints and capturing footage that was never before available to them. 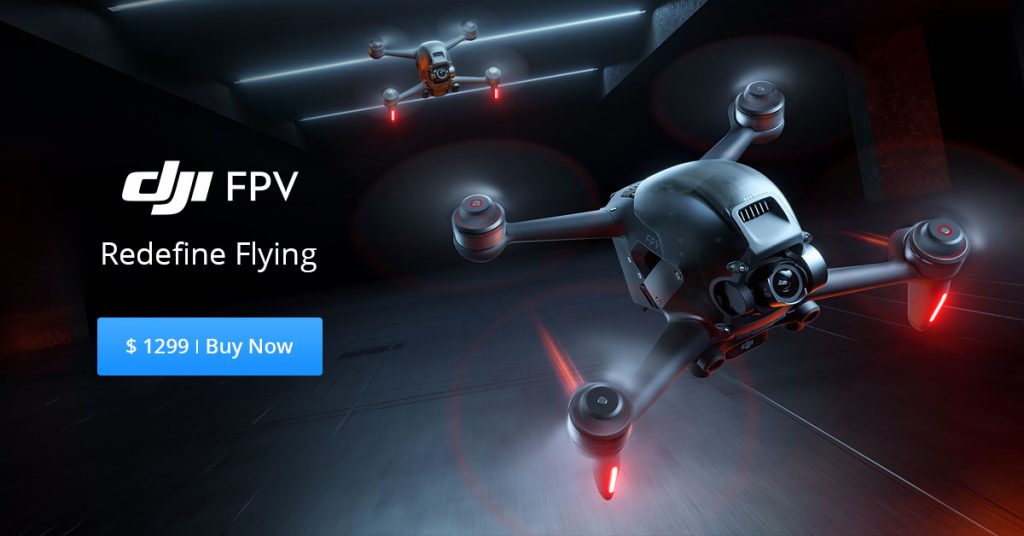