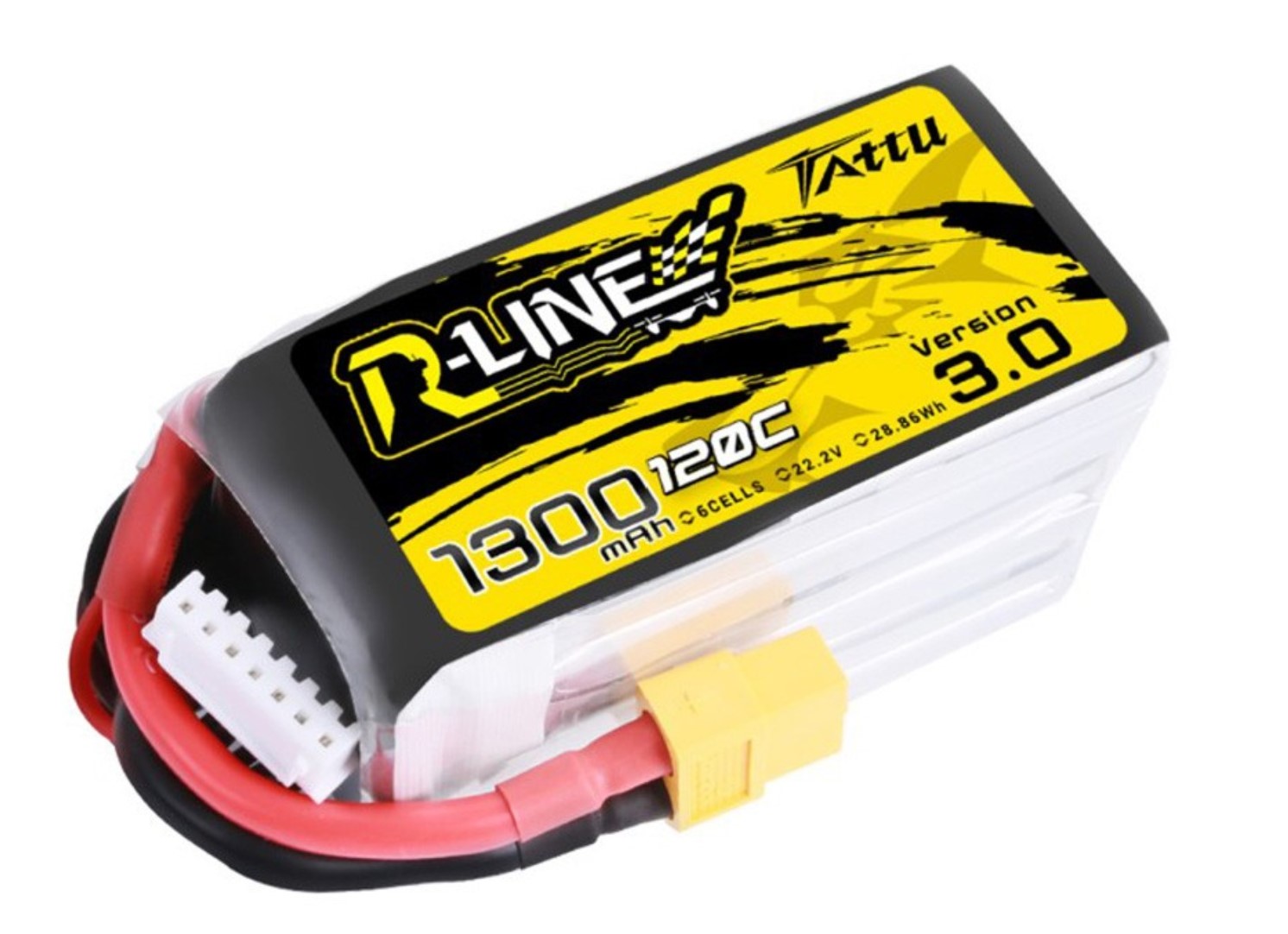 The Tattu R-line series of batteries have been popular among many in the FPV Racing community. Now, with the V3 of the battery out, Tattu promises high quality, reliable power, and a lightweight resulting in an excellent performance while racing. However, with a high price tag of 36.99, is it the best value for money?

At first, when people recommended this battery to me, I didn’t even want to get it. The price of the lipo was too high, especially since I was already crashing and damaging batteries. Yet, one day when I was looking for new batteries, there was a sale on the Tattu 1300mah R-line v3s and I decided to give them a try.

I knew that these batteries would be better than my old 6s packs, but I did not know how much better. I had prior experience with Tattu and their 1300mah 4s batteries (not R-line), and they held up really well. I expected them to be the best batteries I have ever flown.

Upon first inspection, the packaging of the batteries is identical to many other batteries with a cardboard box, foam and bubble wrap surrounding the battery. When I took the lipo out of the box, I could immediately feel how light and small the battery was. I was excited about the lightweight and size but concerned about the durability of the lipo. I could not wait to try these batteries out!

By only touching and looking at the Tattu R-line, these lipo batteries seem high quality. You can tell how light the battery is by just holding the battery. The small size is also significant, and it is almost as small as some of my old 4s batteries. However, the weight of the battery could also be a downside, since there could be fewer protective measures put into the Lipo pack (metal plates) allowing the cells to dent and break easier.

As I compare the batteries to my old China Hobbyline 6s 1300mah batteries, the weight and size are more significant. The R-lines are undoubtedly lighter and smaller than the CNHL batteries. However, the CNHL batteries tend to have more capacity than advertised and have thicker heat shrink and metal plates around the battery.

Other than the size and weight difference of the Tattu R-line and other batteries, the R-lines also have the XT-60 connector and the balance connector (JST-xh) coming out of the same side as the battery. I do not like it this way because it is harder to plug the battery into the charger.

Before I could fly these batteries I needed to charge them. When my three batteries arrived, all the cells were holding voltage at storage charge (3.8v). Charging the batteries were simple, and just like any other lipo. There were no complications charging any of my three batteries during, and after charging. The lipos would hold their charge at 4.2 volts after charge ready to be flown.

Even after flights on the field, there were no problems charging up the R-line. As long as you follow safety guidelines about lithium polymer batteries (charging at 1C, keeping the battery away from flammable objects, etc.), charging up these R-lines will not be an issue. If you do not know how to charge a Lithium Polymer battery, here is an excellent video by UavFutures explaining everything you need to know.

On the first flight with the Tattu R-lines, the performance blew me away. The batteries unquestionably had more power than the CNHL 1300mah 6s batteries. I was genuinely surprised by the throttle that I could not hit a gate during the first 30 seconds of the flight. I was crashing more with this battery than my old batteries, and it took a while to get used to it.

For the performance itself, the battery holds up its voltage well during the flight and does not sag. The voltage does not drop under 20 volts, even during full throttle. While cruising slowly (30-50% throttle) I can get around 4-5 minutes in flight time, and while racing hard (and crashing a lot), I can get up to 2 minutes of flight. This is better than the CNHL batteries which show “Low Battery” warning in my OSD after only 30 seconds of flight. Here is a video of the track I was running the Tattu R-lines.

Even though the Tattu R-line holds up the voltage well during the flight, at some point, the cells drop to really low voltages in the 2.5-3 volt range. The drop in voltage comes unexpectedly, and the quad will not have enough power to fly. There were many times when I was flying for 2+ minutes and then the voltage dropped and I could not fly back to land. This problem can be avoided by not pushing the batteries to the limit.

Overall, the R-line performed really well, providing great performance and lots of power, while giving me enough flight time to at least finish a race.

When I got this battery, I thought it would not be durable with its lightweight. However, I was wrong. I went through many crashes, hard and small, and the only thing that broke was the heat shrink covering the batteries (video of one of my hard crashes). I was pleasantly surprised by the durability of the battery, with the shape and condition of the batteries after many crashes.

The way these batteries stood up was astonishing. Nonetheless, with enough crashes, there will be damage to batteries and some cells will dent making the battery out of shape.

Overall, the performance of the battery is really good. It gives you more power than many other brands in this 6s 1300mah range of lipos. The durability is decent, while the light weight and small size make this battery good for racing. However, I would not recommend this battery to everyone because of its price. At $36.99 for one lipo, it is expensive to buy multiple batteries. There are much cheaper batteries at the $30 price range which will get the job done. They are not as good as the Tattu’s but the price of the batteries versus the performance makes it better than the Tattu’s.

I would recommend buying the Tattu R-lines on sale, where the price can sometimes drop to $30!