Need to know what band and channel to fly FPV on?  How about what set of channels you and your group need for your next race? Figuring out the best frequencies to operate your FPV system on can be a challenging prospect from time to time! Things outside of your control may interfere with your signal, such as WiFi signals, mobile phone towers, and even other FPV Pilots. Frequency contamination is a problem we face in today’s wireless world. The FPV frequency reference chart below might just help you! 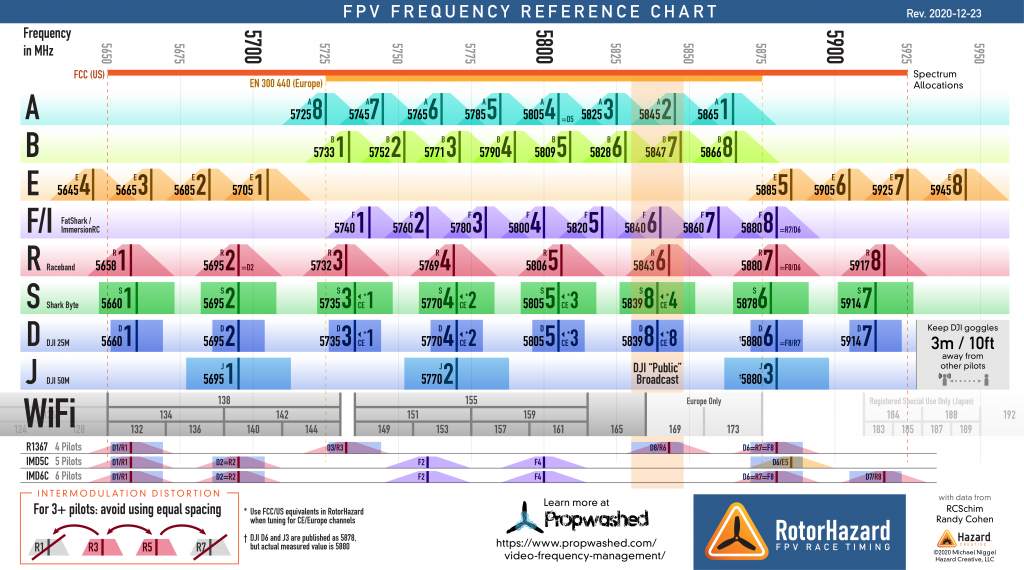 This version of the chart was original developed by Michael Niggel for a video frequency management article at Propwashed.com. It’s now maintained as part of the RotorHazard race timer project.

How the Read the FPV Frequency Reference Chart

Detailed in the FPV frequency reference chart are the most common bands and channels used by FPV transmitters and receivers in the 5.8GHz range.  Each of the solid lines are the actual listed frequencies, while the lighter areas on either side represent the spectrum usage of that channel.  One of the problems we face today with flying groups is the spread of each individual channel.  As you can see in most of the bands, this is a problem as the channels spectrum overlap, not only within the band, but between other bands.

Bands A, B, and F overlap one another completely and still share spectrum with Band R.  Band E is unique as it has two groups of four channels on either side of the spectrum, however each of the groups still overlap one another.  Pilots who fly in a group using channels that overlap can experience bleed over from another pilots FPV system into their goggles.  Never a fun moment.

This led to the development of Raceband, or Band R.  Here each channel is spread out across the entire allowable range with no bit of spectrum overlapping another in the same band.  This allows for better flight in groups, such as in races.  The new DJI Digital FPV System seems to have taken a page out of the Raceband manual in spreading it’s channels out.

The Problem with WiFi

The gray bar down at the bottom details the the channels used by 5.8GHz WiFi routers common throughout populated areas.  Both business and residential areas are rife with WiFi signals, and unless you are away from these areas, your video can be affected by it.  On the flip side, if you’re on your workbench at home (or work…. we don’t judge), and your WiFi drops out, it could be your VTx causing it!  If you’re experiencing issues with signal quality, keep in mind this chart and stay toward the channels on the higher side of the spectrum.

Notated by the bars across the top and the dashed lines going down through the bands is the area relegated by the FCC to amateur radio for the 5.8GHz range.  As you can see there are channels and spectrum of the channels that exist outside this range.  These channels are technically off limits in the US as they bleed into other critical radio frequency bands, as shown in the image below. Similar markings are also included for Europe, which as a much narrower allowed band.

Intermodulation Distortion occurs when two signals interfere with each other and either create a harmonic resonance or cancel each other out.  In our case, the result is the same, it creates interference in the signal which leads to static or loss of signal in the goggles.  Certain channels can cause IMD between each other, even if they are far away on the spectrum.  To combat this, the bottom list on the FPV Frequency Reference Chart provides channels that you can use when flying with a group that will avoid the IMD issue.  The chart gives recommendations for channels depending on the number of people you are flying with.  You can read up more on Intermodulation Distortion here: Intermodulation Distortion: Destroyer of Group Video

Here are some other resources, including a printable version of the chart and the US Frequency Allocations Chart.

FPV continues to make my childhood dream of being a pilot an amazing reality. If it flies, I'm into it, be it miniquad, microquad, or fixed wing. I am inspired everyday by the community and thrilled that I get to give back through my writing.