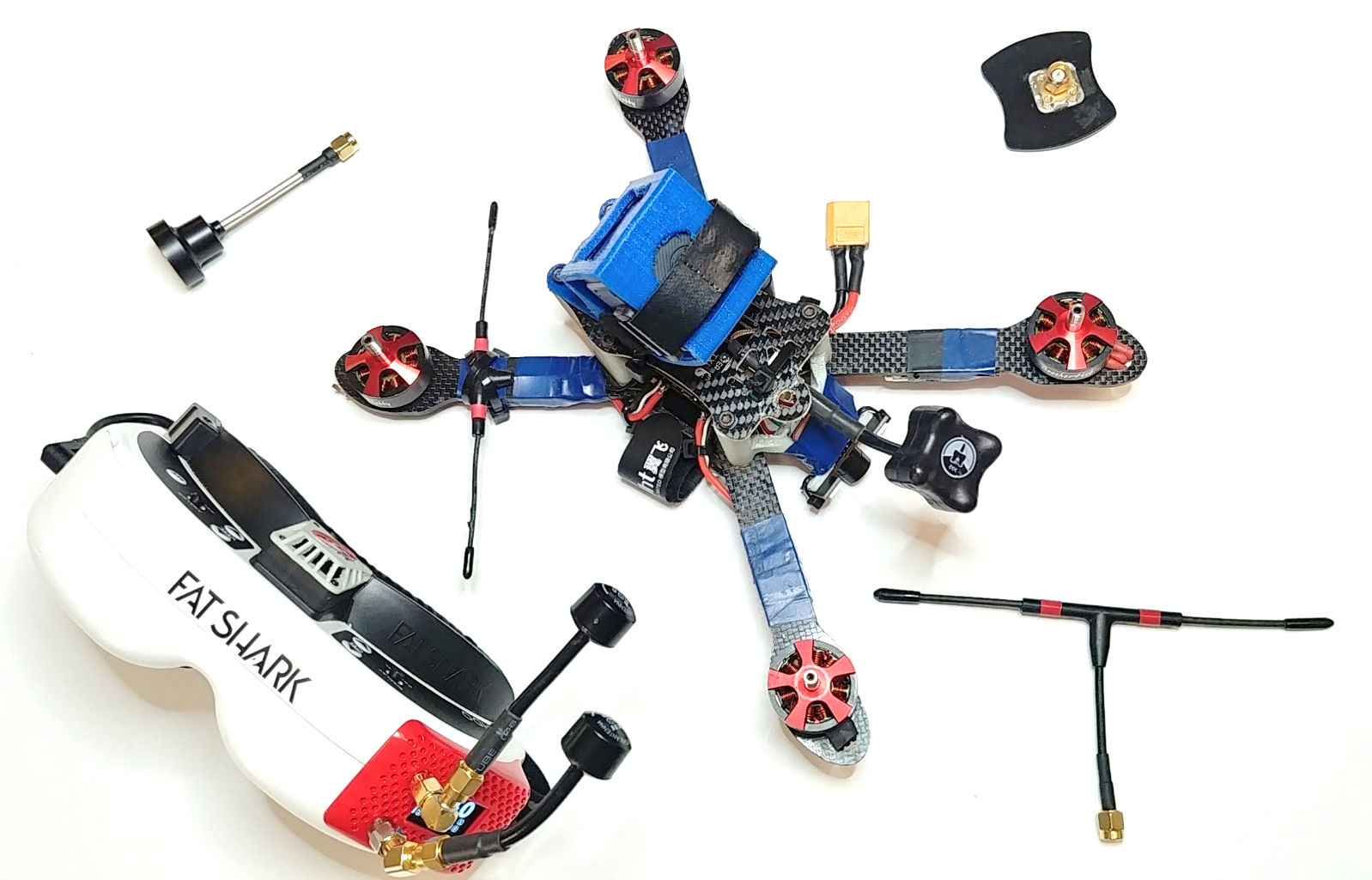 An FPV drone antenna is a device which radiates radio waves in a specific pattern. They are essential in this hobby as they form part of the control links to and from the craft. In this guide, I will go over the basics of an FPV drone antenna along with some mounting tips and tricks.

To demonstrate the propagation of an FPV drone antenna, manufacturers use radiation plots. A single circular plot displays the antenna gain from a single plane. The plot displays the gain at a given angle from the plane’s origin point. The higher the gain the better the signal. Gain is measured in dBi and is a logarithmic scale. Every time the gain goes up by three, the signal strength doubles. For example, if a signal is at 3dBi on an area of a radiation plot, the signal there is twice as good as an area where it is 0dBi. If it is 6dBi, that is four times as good. The same goes in the negative direction where -3dBi is half as bad as 0dBi. The image below shows a radiation plot of a right hand circularly polarised antenna (the Lumeneir AXII) from the side. This antenna has the best gain of ~2dBi at +/- 90 degrees and the worst gain at 0/180 degrees as indicated by the green line on the plot. You can learn more about FPV drone antennas here.

There are a few commonly used antennae types, all with different advantages and ideal use cas

A circularly polarised (CP) antenna has a radiation pattern like a doughnut. The stick of the antenna spears right through the hole in the middle as shown in the diagram below. CP antennas can receive or transmit radio waves in almost any orientation due to their polarisation. Their highest gain is along the horizontal plane and their lowest is along the vertical plane. Essentially, this antenna will perform the worst if you point the end of it at your drone.

monopole antennas, like CP antennas, also have a doughnut shaped radiation pattern. Their doughnut however is more squished with a larger hole in the centre. The main difference between a CP antenna is that a monopole’s signal is at its best when the transmitting and receiving antennas are parallel. When two monopole antennas are perpendicular (or at a right angle) to each other, or are pointing directly at one another, they will perform the worst.

Patch antennas have a three-dimensional tear drop shaped radiation pattern in one direction. This means that they have high gain in one direction (the direction the patch is facing) but very low gain in other directions. These are ideal for mounting on a receiver.

Now that you know about the different antenna types, and their characteristics, I’ll explain how to best mount them. When mounting antennas on a drone, it is important to remember that carbon fibre inhibits radio waves. Therefore, aim to mount FPV drone antennas with as little carbon fibre blocking them as possible.

Most 2.4GHz receivers use two linear antennas. Ideally, these should be mounted perpendicular to each other. The best way of doing this is to lock a zip tie to each arm and to heat shrink each antenna to one of the protruding zip ties. The image below demonstrates my mounting method.

For crossfire antennas, you should also aim to mount them with as little carbon blocking the antennae. Crossfire antennas have a null or hole in the radiation doughnut at their ends. For racing, your proximity means you don’t really have to consider the nulls. For freestyle and long range, consider a placement where the nulls won’t usually point towards the transmitter. My crossfire mounting for racing is demonstrated below. For the newer crossfire diversity receiver, the antennas should be mounted perpendicular to each other in a similar manner to the 2.4GHz RX mounting pictured above. To learn about crossfire RX mounting for long range, you can read Callum’s build guide here.

In general, you should also make sure to have your transmitter’s antenna in the same orientation as your drone’s antenna when in level flight. For example, if your crossfire immortal T antenna is horizontal in forward flight, your transmitter’s antenna should also be horizontal. This also applies to radios with one antenna such as the Taranis. Spektrum radios already use two fixed perpendicular antennas so positioning is not essential.

A correctly mounted VTX antenna will ensure optimal signal. Your VTX antenna should be mounted perpendicular to the direction your camera faces. This way, it will always be directly upwards whenever the drone is in forward flight. This applies to fixed wing aircraft too. This is the ideal antenna mounting angle for both linear and circularly polarised VTX antennas. Ideally though, a CP antenna such as the Lumeneir AXII should be used. Using a high-quality antenna designed by Video Aerial Systems such as the Lumeneir AXII is also a great way of ensuring optimal performance.

Regarding the placement of the VTX antenna on the drone, it should be positioned as far from the frame as possible. Ideally the antenna should also be in a position where a theoretical line can always be drawn between it and your VRX antennas without the drone frame blocking it. The best solution for this is to mount the antenna out the back of the craft at an angle.

When mounting the antenna, you also want to mount it in a way which minimises the force on the VTX in a crash. By securely mounting your antenna to your craft with some slack in the pigtail going to the VTX, you can minimise the risk of VTX damage. I recommend using cable ties and/or a bracket.

For racing, I prefer to mount my antenna close to the frame (inside my canopy) to prevent damage. Better signal can be gained from using a longer antenna however I prefer the extra durability for a minimal video performance loss. For long range, I would recommend a long protruding antenna. The below image demonstrates where I position my VTX antenna.

VRX antenna mounting is also fundamental to a good FPV feed. If using a single receiver module, I recommend a circular polarised antenna. On diversity set-ups, I recommend using both a patch and a CP antenna for must use cases. For long range, I recommend mounting your VRX antennas onto a ground station to prevent head movements from impacting the FPV signal. For noisy environments where there is a lot of multipathing (such as indoor flying), I do not recommend using a patch antenna. You should experiment with your VRX antennas in new scenarios to find which is ideal for the surroundings.

Personally, I use two vertical Lumeneir AXII antennas on my ImmersionRC Rapidfire module for racing scenarios. This setup works well for racing as the removal of a patch decreases the sensitivity of the setup. A VTX will ‘leak’ its signal into surrounding channels which can be picked up by high gain antennas. My problem was that using a high gain patch antenna would, in certain scenarios, amplify the leaking VTX signal from another pilot flying closer to the pilot tent which would interfere with my FPV feed.

When multipathing occurs, the RX receives a wave directly from the TX and others which have bounced off surfaces. The best situation is when all radio waves arrive in phase and add to each other. The worst case they arrive out of phase and cancel out. By having the VRX antennas half a 5.8ghz wavelength apart which is ~2.5cm (1”), if multipathing occurs and the sum of the signals arrives out of phase at one antenna, the sum of the signals will arrive more in phase at the other antenna.  This is also assuming the worst case when the multipath signal is similar amplitude as the direct wave.

FPV drone antenna quality, although unrelated to mounting is an equally important factor. Antennas such as the Lumeneir AXII’s may cost up to four times as much as their competitors but you tend to forget about that when you have a near perfect FPV feed. Cheaper antennas are generally less durable and less sensitive. Most antennas from a reputable company over ~$10 will usually be good quality. A recent test even demonstrated how good the cross polar rejection of the AXII’s is compared to the competition.

Hopefully this article has provided some insight into FPV drone antennas. You should now be able to make the best mounting decisions to make your video setup perform at its best.