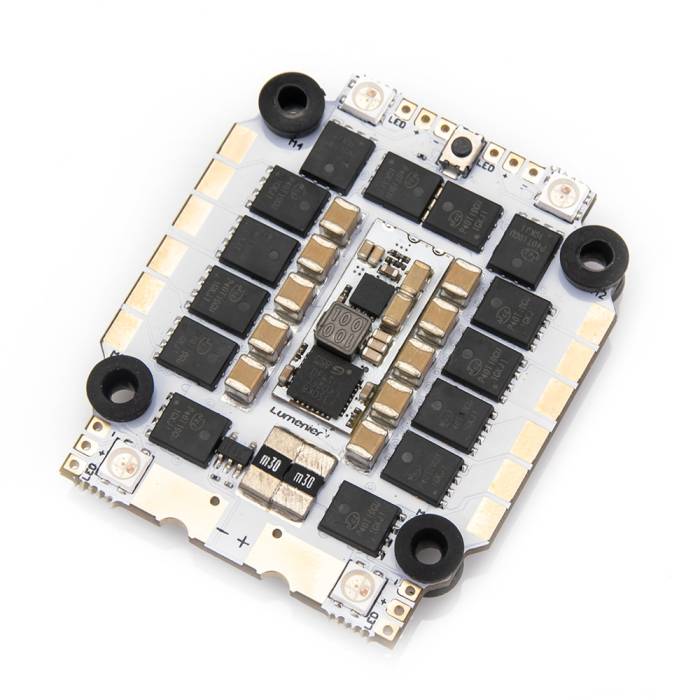 The Lumenier Razor LED 55A 4in1 F3 BLHeli_32 2-6s ESC is a 32bit ESC running the latest gen. BLHeli_32 firmware, and featuring future proof powerful F3 processors. Now 4 of these ESCs combine to have more processing power than your whole flight controller! The 32bit architecture enables the ESC to run at incredible speeds resulting in better performance, faster input signals and lower latency compared to older 8bit ESCs. This ESC also features a live telemetry connection for more advanced flight controllers, as well as a top of the line current sensor.

The Lumenier Razor LED ESC also includes 4x onboard RGB LEDs with a pre-programmed controller chip with an easy-press button. Simply press the button to cycle through all the LED color options and patterns. In addition this ESC is a distribution board for 4x more sets of LEDS that you can solder on to place on your drone's arms. All of the connected LEDs will by in sync with the on-board controller making it super simple for you. Changing all the LED colors on your drone is now as easy as a press of a button! (13 pre-programmed colors and patterns)

Not only does it have on-board LEDs, but the Razor LED ESC acts as it's own LED distribution board too! Hook up to 4 additional RGB LED strips for a super bright and colorful quad. The best part is the Razor LED ESC has an built in 5v regulator that powers all the LEDs for you in addition to sending the signal to each LED with the pre-programmed settings. All you have to do is press the button to cycle through all the cool effects.

NOTE: The first batch has an error with the silk print label of the LED pads nearest to M1. The pad labeled "-" for ground and "LED" for signal are reversed. If you are adding additional LEDs to your ESC via these pads, simply solder the "-" ground on the "LED" signal position and visa-versa. This only effect the pads near M1. The other 3 sets are correct.

32bit processors run faster than 8bit, at which we can expect better performance from the new 32bit ESC’s. Faster input signals with lower latency and higher update rate would be possible, such as Dshot1200 or even faster protocols! (Read about DSHOT) (Read about DSHOT1200)

The 32-bit platform also allows more functionality and features that simply wasn't possible on 8bit ESC's, such as

The Lumenier Razor LED ESC is compatible with other RGB addressible LEDs as well so you can add up to 4 more LED strips to your quad! The ESC has a built in 5v regulator that powers additional LEDs and also send the signal for the color/pattern automatically by the push of a button.