BetaFPV LiteRadio2: A Budget Radio with an Impressive Feature Set 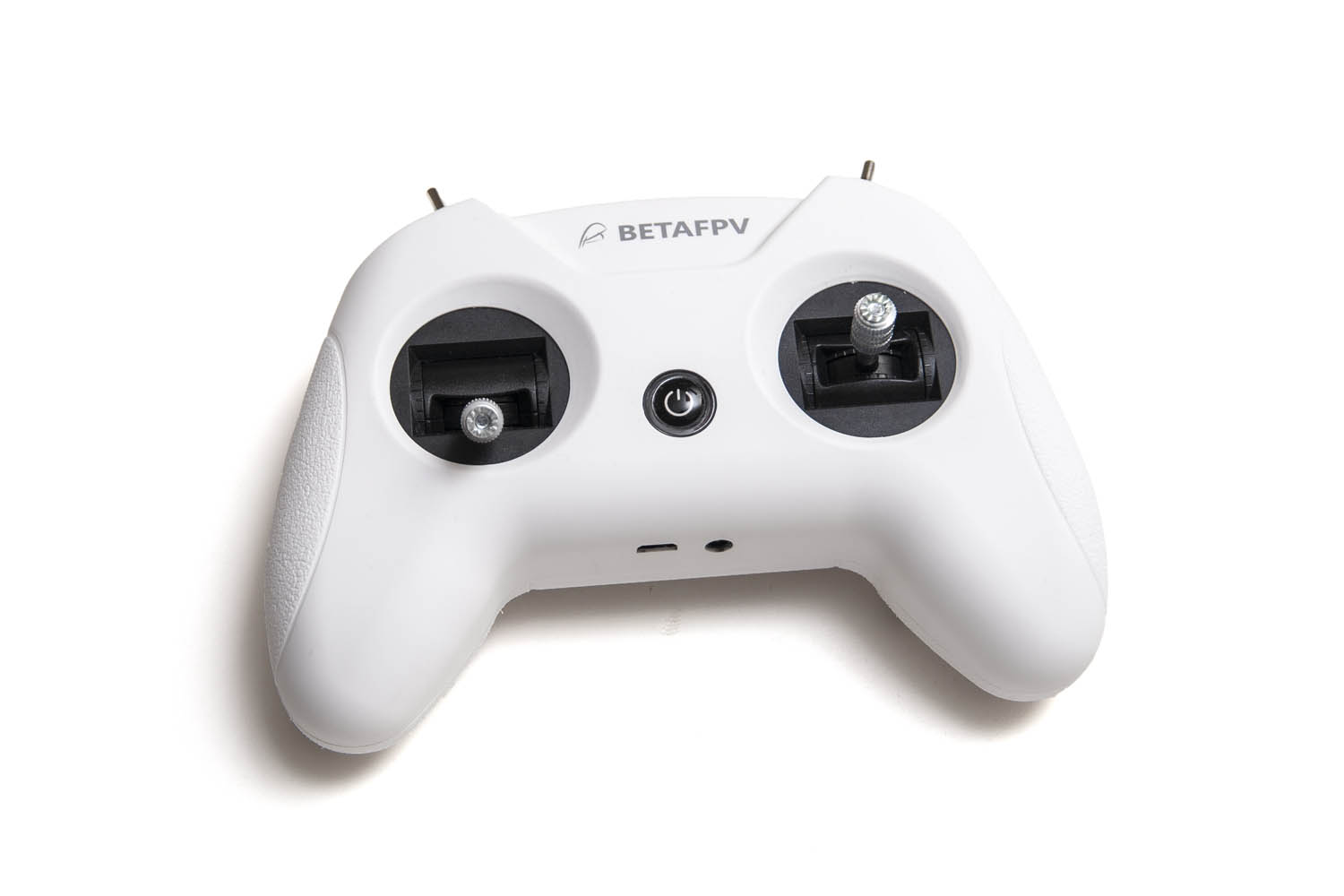 The BetaFPV LiteRadio 2 is an 8-channel OpenTX budget radio control transmitter. For only $40, can it be any good? It certainly does not match up to a full-size radio, but when you consider value for money the LiteRadio 2 makes a compelling argument. 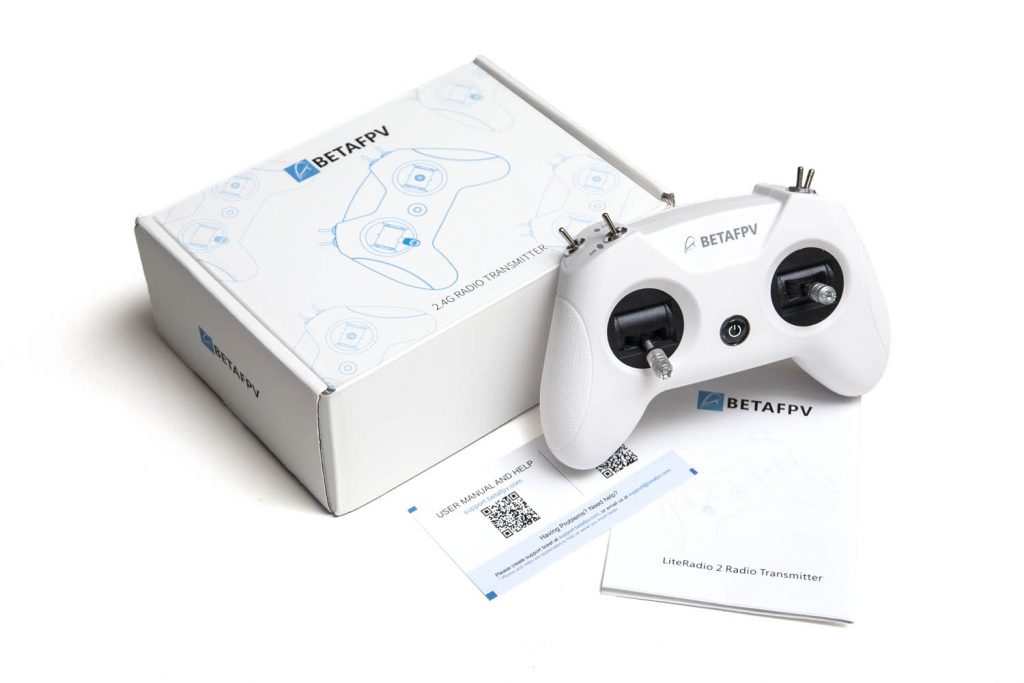 Included in the box is the radio with internal battery, a help card, and a printed manual. The printed manual is a bit of a surprise from BetaFPV as their quads don’t come with them. Unlike many manuals, it’s clearly illustrated and well written.

The LiteRadio2 is currently offered in Bayang and FrSky protocol versions. The Bayang protocol is used by lots of toy-grade drones that often ship with small, terrible controllers. BetaFPV’s LiteRadio 2 would allow you to control these toys with much better precision and ergonomics than the controllers they ship with if you chose that option. If you choose the FrSky version instead, you gain a controller that can pair with many hobby- and pro-grade models and radio receivers.

Most of the sticks are spring-loaded and will automatically return to center, but a stick without a spring is needed for maintaining throttle position. The Mode 1 option has the spring removed from the up/down direction on the right hand stick. For Mode 2, the removed spring is on the left stick. Mode 2 is by far the most common configuration. The FrSky D16 uses ACCST 1.0, so it’s compatible with all older receivers and micro quads—but not with receivers that have the ACCST 2.0 upgrade. For this review, we’re looking at the FrSky Mode 2 version. 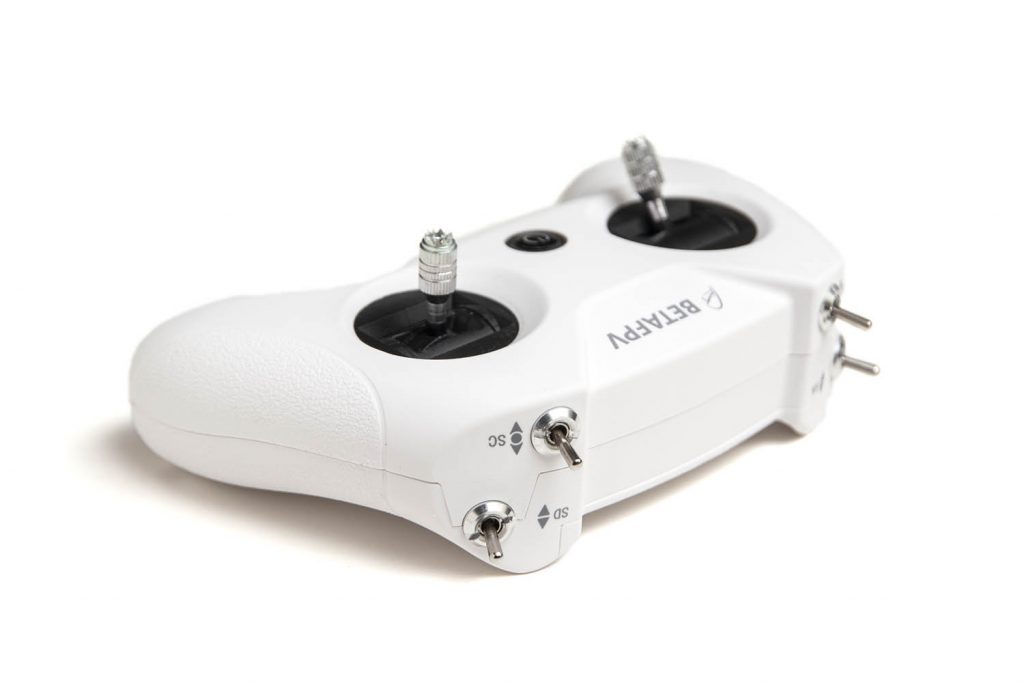 There are a few features that stand out in the LiteRadio 2 and help to make it a very strong option.

The LiteRadio 2 will connect to your computer and act as a USB gamepad. This is an excellent feature to have in a controller! Learning to fly within a simulator can save a lot of time and money—not to mention the safety benefits. Simulators remove the costs of crash repairs and battery replacement. Free and paid simulators act so much like real drones that all basic skills are directly transferable. Once you’re proficient at flying, pro pilots continue to use simulators to test settings and learn race courses.

If you’re using Windows, you might run into a couple issues when trying to use the simulator mode. First, Windows 10 introduced a driver that makes controllers like this unusable, but you can follow this guide to replace the driver with another one that works well. No installation or extra software is required. Second, you may need to calibrate the joystick in the Windows Game Controller dialog. My radio would only use the top half of each stick travel until I did this. Afterward, it worked great.

Switching into USB Joystick/Simulator mode doesn’t seem to automatically shut off the internal radio transmitter. The unit runs hotter and the battery runs down more than it would if the transmitter could be shut off. You can do this by adding a separate model definition with OpenTX, but the only way to switch between them is by connecting the radio to a computer.

That brings us to our next feature. Advanced users of the radio will find a feature under the hood that’s a bit difficult to use but unlocks a lot of power: OpenTX. This is open-source software that runs on many transmitter radios. OpenTX allows the user to change the way every input and output on the radio behaves. For example, you can use a switch to adjust your maximum throttle output, set up multiple switches for two-stage arming, or use a panic switch when learning acro mode. There are a great many possibilities. Unlike most OpenTX radios though, the LiteRadio 2 has no onboard display screen. This does limit its ability to provide useful feedback to the user. FPV pilots rarely have time to look at the screen during flight, but it can be useful for changing models (as noted above) or running scripts. To configure OpenTX, you’ll need the custom OpenTX Companion software provided by BetaFPV.

Another neat feature usually only found in much larger radios is the “trainer” port. This allows two radios to be connected together as instructor and student. An instructor can provide or take away control whenever they feel appropriate. The LiteRadio 2 is set up to be a student radio by default so you just need a trainer cable (a 1/8in audio cable) and a master radio to get started. Configuring a master radio for trainer mode is an advanced feature that each radio will do differently, but this trainer setup guide is a good place to start if it’s also OpenTX. 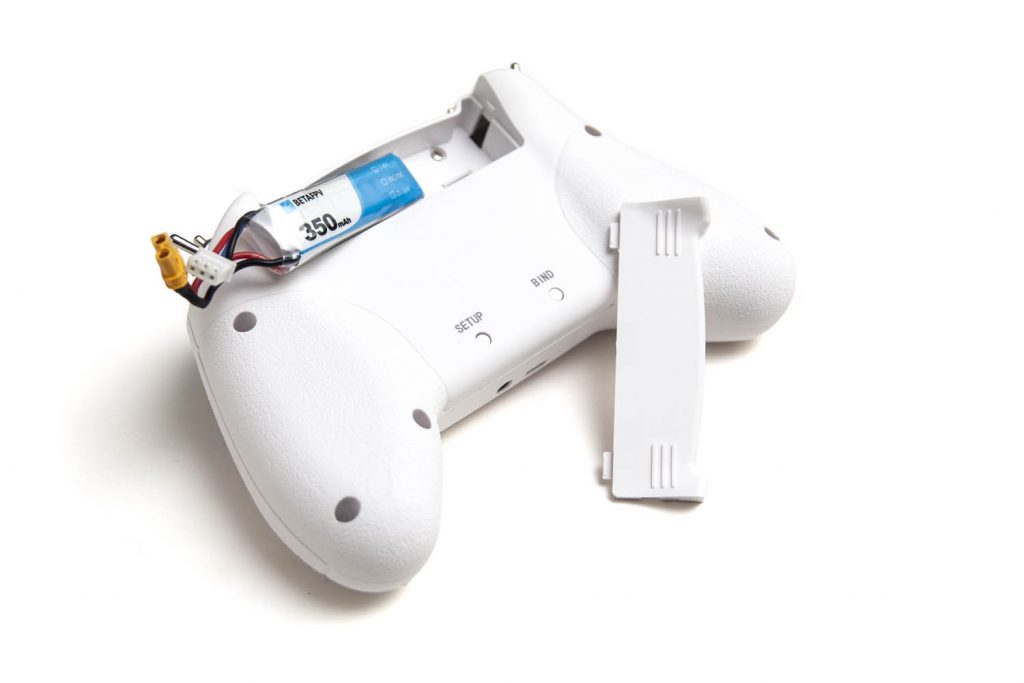 BetaFPV has chosen a molded white plastic case. It’s stiff and solid without a lot of weight, so it feels like the case will take a fair beating from normal use without breaking. For the most part there’s a smooth matte finish across the surface. It’s likely to show dirt and wear quite easily. Textured areas are provided for grip on the sides and back.

How well the transmitter fits your hands will vary from one user to another. It’s similar to a gaming console controller in size, but the difference in stick size and position makes it feel different to hold and use. I didn’t have any problem using the controller for the short durations typical to actual flying, though my hands did start to tire out after an hour of non-stop use on the simulator.

The USB port and trainer port are positioned facing the user, which is inconvenient for gamepad and trainer use. A better placement would have been the exact opposite, at the top. The current position unfortunately provides an opportunity for carelessness to break your cables or radio. 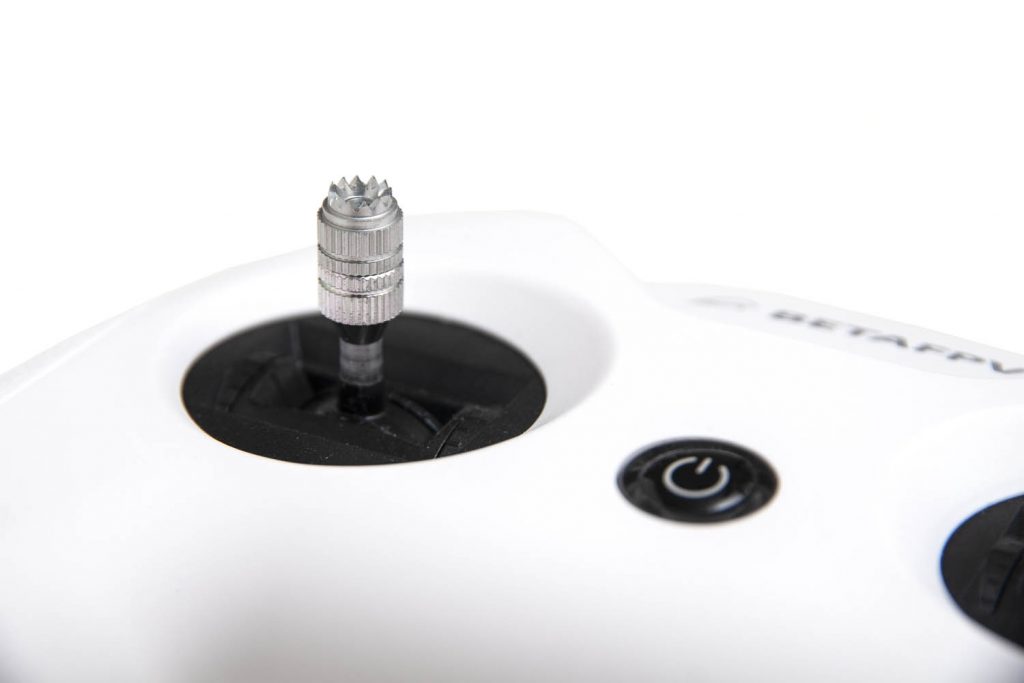 The BetaFPV LiteRadio 2 has removable stick ends that can be customized with a host of aftermarket options.

The switches on the radio are a little short and stubby. This makes them a little harder to use than typical switches on a full-size transmitter. If you use your thumbs on the sticks, manipulating the switches isn’t too hard. However, a pincher will have a tougher time getting enough leverage to change switch positions during flight. As a benefit, though, short switches are less likely to break when the radio is put into a backpack or knocked off a table.

The gimbals in the LiteRadio 2 are much better than I expected for a budget transmitter. They have smooth travel in a roughly 80° arc. The springs are fairly stiff. While stiffness is personal preference, I like them exactly as they are. A stiffer spring provides more resistance to your movements, but I find this provides additional tactile feedback that helps my hands find the right position that I intend.

One surprise I found while exploring the radio are that the gimbal stick ends are removable. They are M3 sized, opening up a wide range of customization options such as grips in various colors, sticks with adjustable height, and even various shapes such as Lotus, Umbrella, Pole, and the Honey Stick. Should you later purchase a more expensive radio, some will have the same size stick ends and would be transferable.

The gimbal output definitely has some noise; the output values bounce around and stutter more than most radios I’ve used. This isn’t surprising at this price point. For basic flying, this isn’t a big deal as it smooths out—but top pilots or those with tightly-tuned quads with high response definitely won’t want the LiteRadio as a daily driver. I didn’t test the range but it would not surprise me if the LiteRadio 2 came up a bit short. It’s more than enough for flying indoors and those just learning in an open field. 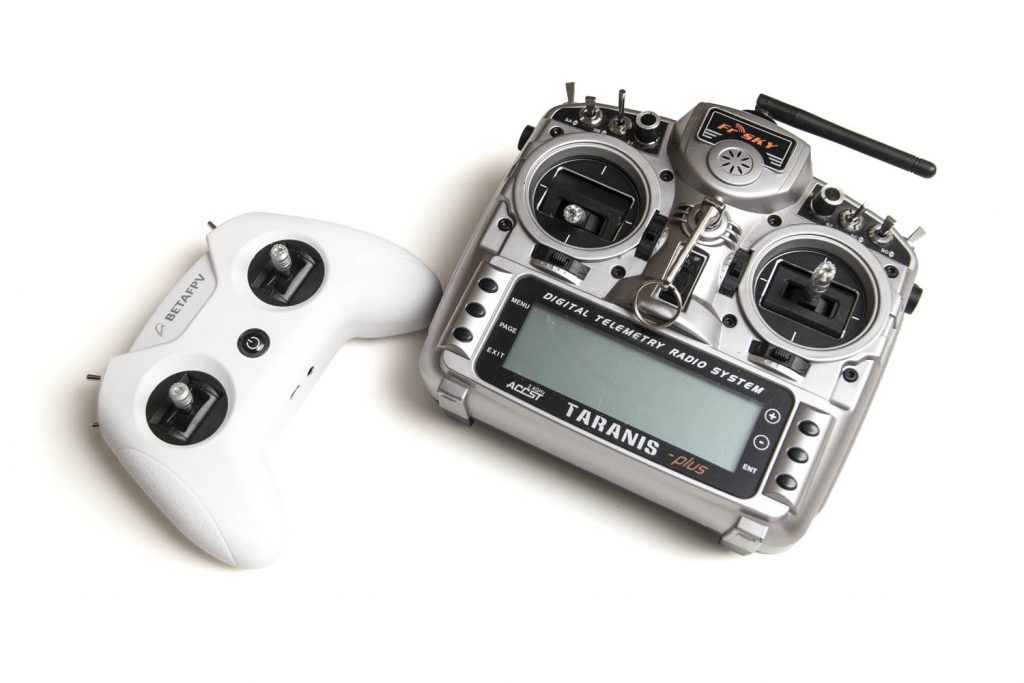 The BetaFPV LiteRadio 2 is far smaller than the FrSky Taranis X9D+, but that makes it much easier to fit into a travel bag.

The BetaFPV LiteRadio 2 is definitely the most capable radio currently available at its price point. Features like USB joystick mode, trainer, and OpenTX are rarely found at this level, never mind all three at once. The radio is reasonably comfortable to use. If you select the Bayang protocol you’ll be able to control most small toy drones with better precision; with the FrSky protocol you gain a controller that can be used on a great variety of hobby aircraft.

If you already have a radio, there won’t be a compelling reason to switch. The more expensive radios have all the same features and more, better ergonomics, and better controls. Where this radio shines are whenever it’s fine to compromise for budget. For example, a second trainer radio or a radio for a new pilot with a small budget or is unsure of their long-term interest. In these cases, I won’t hesitate to recommend the BetaFPV LiteRadio 2.