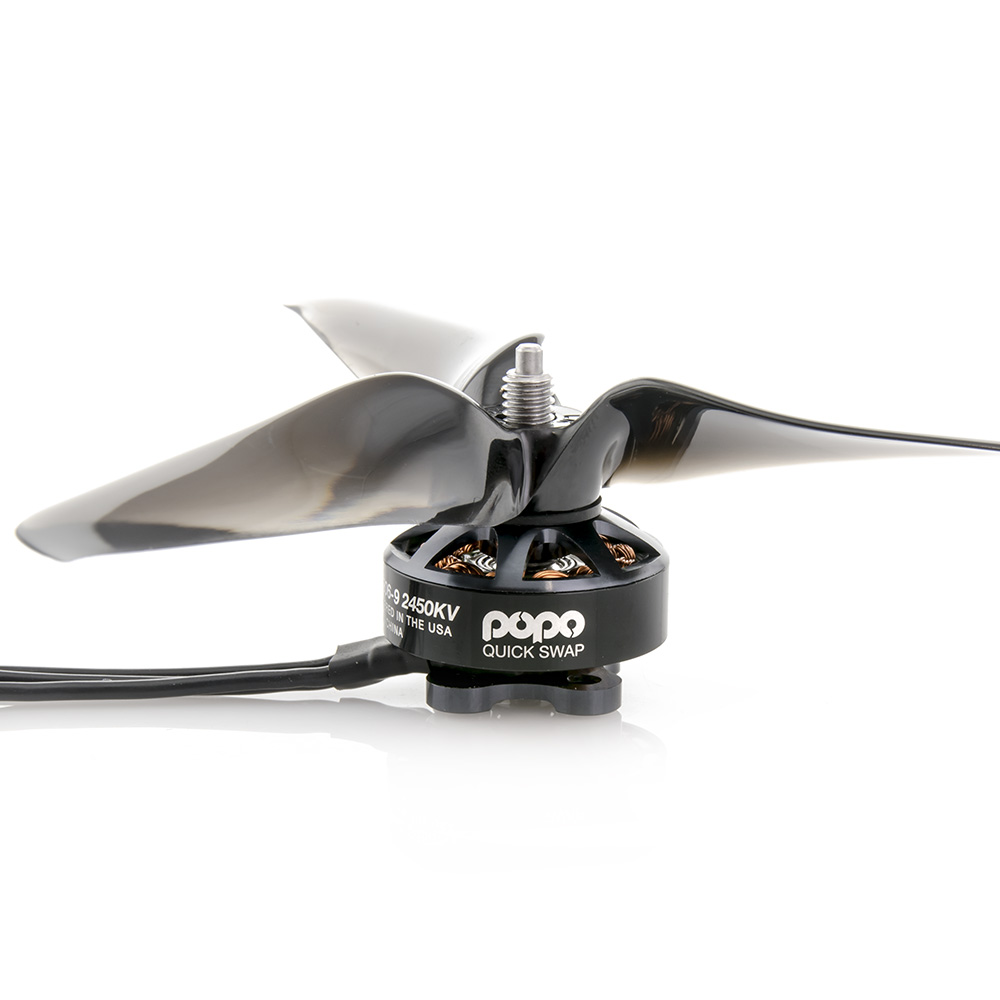 POPO® ("Pop On, Pop Off") is a new propeller quick-swap system that enables mounting props to brushless drone motors in seconds with the push of a button.

POPO® eliminates the need for a prop nut and wrench to attach propellers to motors.  A full set of 4 props can be removed and replaced in under 20 seconds without tools. This provides convenience in the field, as well as speed and simplicity under race day pressure. It also is great for people who have a hard time gripping the motor bell and removing traditional locknuts.

The ability to quickly remove and reattach a full set of props is a key safety feature for drone enthusiast that are frequently repairing and tuning their drones.  POPO® prevents cuts from sharp propeller blades since there is no longer a need to hold the motor tightly while tightening a nut.

The POPO® system prevents prop slippage which is a common error for new pilots who accidentally don't tighten lock nuts enough. The system fastens props into place with an audible click.  No guesswork on tightening the lock nut.

Importantly, POPO® compatible propellers can still be used on traditional threaded motor shafts. However, the most recent POPO®  Motors have upgraded to the new POPO Pro system. This system removed the extended plunger which in rare cases would inadvertently trigger during a crash or if the plunger came in contact with something during flight - resulting in the ejection of the propeller. Motors with the POPO Pro system are no longer compatible with standard propellers. POPO Pro Motors must be paired with POPO compatible propellers.

POPO® is an industry initiative and compatible motors and propellers are already available from the world's top brands.  Manufacturers such as T-Motor, Brotherhobby, and Lumenier all offer POPO® compatible motors, with additional manufacturers set to release their POPO® motors in the near future.

Shop GetFPV.com for the latest model POPO® compatible motors from all your favorite brands.

How does it work?

POPO® implements an elegant push-button quick-release mechanism in the established 5mm prop shaft. Props that are POPO® compatible can use the mechanism as well as be mounted on non-POPO compatible motors, allowing pilots to easily mix and match. The system does not get in the way of mounting non-POPO compatible props, which are mounted with a conventional lock-nut and wrench, just like it works on any other motor today.

What do I need?

Lumenier Butter Cutters and Lumenier Gate Breaker props were the first POPO® compatible props on the market years ago. Since then, Lumenier has licensed the POPO® IP and specifications to virtually every major propeller manufacturer in the FPV industry. Look for the unique 3-dimple design on the inside of the prop hub as a quick indication of POPO compatibility, but check the manufacturer's page for complete information.

GetFPV carries a wide variety of POPO® motors from brands like Lumenier, T-Motor, Xhover, Brotherhobby, and XILO. We are constantly adding new POPO products to meet all your flying needs.

Intro to POPO by Joshua Bardwell

POPO® is an industry-wide Initiative for innovative and safety-minded manufacturers and enthusiasts. Motor and Propeller manufacturers interested in joining the POPO® Initiative can click here to contact Lumenier.