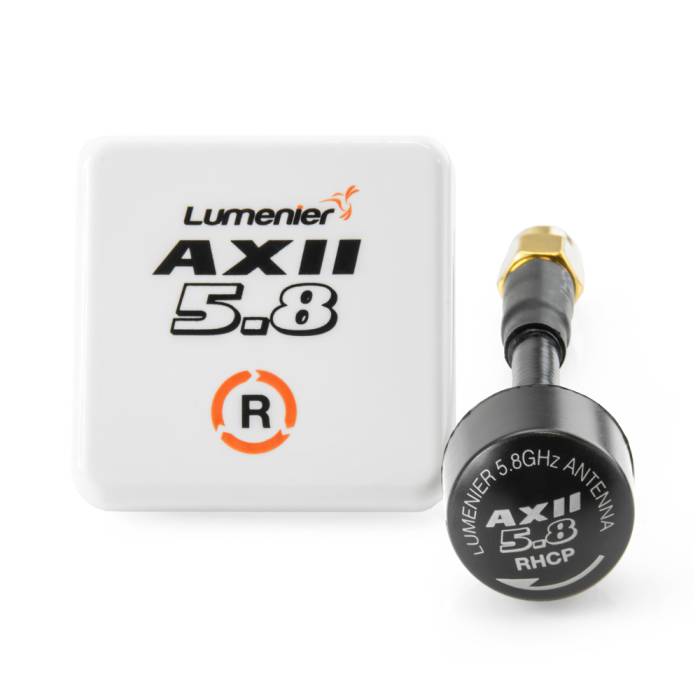 Two of Lumenier's most popular antennas can now be found sharing the same box! We figured we would save you a few clicks (and a few dollars) by making the perfect diversity combo. The renowned AXII antenna gives clear and even signal in near perfect circularity, while the newly released AXII Patch Antenna will give you incredible range and penetration where it is pointed. A perfect upgrade for your goggles or ground station.

The Lumenier AXII 5.8GHz Antenna makes a giant leap forward in FPV antenna technology. Lumenier, in collaboration with renowned FPV antenna designer Hugo of TrueRC, brings you one of the smallest, lightest and best-performing FPV antennas in the world. The AXII antenna is an original design that features a new RF pathway technology (unique hybrid network) allowing it to be incredibly lightweight (7.6g) and less than half the size of most other 5.8GHz CP antennas.

The Lumenier AXII 5.8GHz Patch Antenna offers you the highest performance you can get from a mini patch antenna designed for FPV. The Lumenier AXII Patch has an industry leading 8.4 dBiC gain for long range flying and excellent penetration through objects compared to standard omnidirectional FPV antennas. It also features a best in class 95% efficiency (most mini patch antennas are below 75%), which means you get amazing performance and the best picture in your video goggles. Lumenier, designed in collaboration with renowned FPV antenna designer Hugo of TrueRC, brings you the Lumenier AXII 5.8GHz Patch Antenna.

The Lumenier AXII Patch Antenna features an ultra-thin active element suspended above the reflector, which allows for a higher velocity factor and lowers losses. This technology along with precision manufacturing results in a top of the line receiving antenna. It works great on both video goggles or ground stations for 5.8GHz, and capabale of receiving signal up to many miles away.