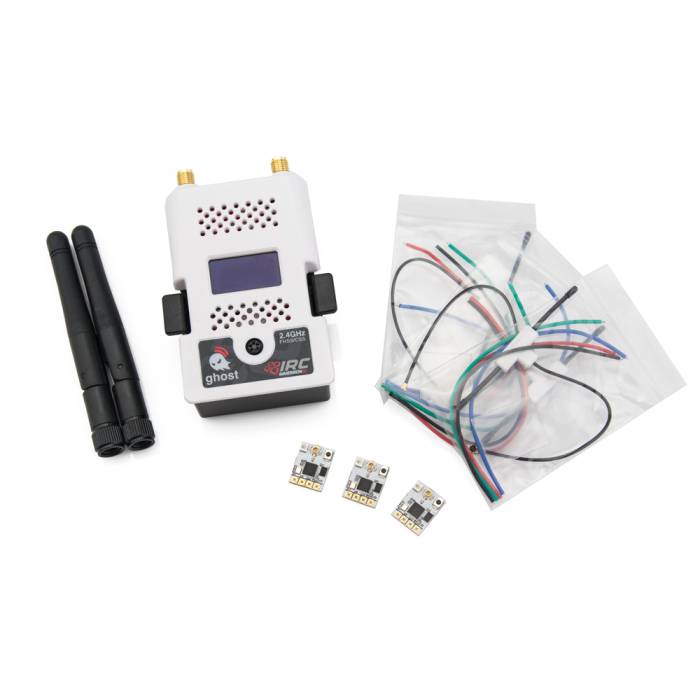 Notify me when this product is in stock
ImmersionRC Ghost 2.4Ghz Combo Kit (1x TX, 3x RX, 3x Antennas)
The Ghost is the next generation R/C control system from ImmersionRC.

All You Want, and a Little More

From the engineers who changed the Analog FPV world with rapidFIRE, comes the Ghost to set a new bar for R/C Control technologies. Go faster, further, safer.

Three years in the making, countless fun-filled hours of testing by the world’s fastest pilots. Designed in Switzerland.

Choose from several modes of operation in your Ghost Transmitter. The slowest of the two Race modes runs at a 160Hz frame rate, while the fastest ‘Pure Race’ rate opens the throttle to a 222.22Hz frame rate.

OpenTx to Flight Controller latency is expected to run below 4ms.

Can racers feel this? a good question to ask… but maybe a better question is whether you want to race against a pilot which is using it…

ImmersionRC is setting a new standard with its Ghost system serving both the needs of Long-Range pilots, Freestylers, and Racers.

Easily achieve ranges of 10s of km with equipment light enough, and antennas compact enough, to perfectly accompany your Nano Goblin™ into the neighboring country.

Since 2.4GHz antennas are relatively small, a directional antenna on the transmitter can easily double the expected range.

The EU-legal 868MHz is a paltry 2MHz wide. Packet loss with even 4 pilots in the air is not pretty. Add another 4, and racing isn’t fun anymore.

The USA-legal 915MHz band is a little better, at 15MHz wide.

With recent enhancements to Flight Controllers (feed-forward) providing superb performance, but quite sensitive to packet loss, every little helps.

The first Ghost Transmitter is a ‘JR’ style module, with an integrated OLED display and Joystick. Configure it seamlessly without the need to interact with Lua scripts.
Depending upon the region, up to 350mW of RF power may be emitted through two supplied short-dipole antennas. Antenna diversity is the default mode of operation, but a single antenna mode is a menu option away.
A simple menu system shows all critical parameters, including a spectrum analyzer, and a real-time display of system latency, from R/C Tx to Flight Controller.

Size matters. The Ghost Átto receiver weighs in at about 0.6g, and is only 14.8 x 11.5mm, a 15% smaller footprint than its closest competitor.

Most standard protocols are supported, including PWM, SBus, Fast SBus (200k), SRXL-2 (400k) and an inverted SBus (or rather an inverted-inverted SBus) to increase flexibility with F4 FCs.

Deja-Vu binding ensures that receivers already ‘known’ by a Ghost transmitter (through a previous bind operation) no longer require a button press to bind them. This also goes for new receivers, which will bind for the first time without the need for the button (all of this because we can’t stand tearing models open to find that buried bind button).

Editor’s Note: Should we mention that the Átto is the ‘Big’receiver?… more on that later.

That space on the FPV.Connect board… yeah, that is for a Ghost receiver, the Átto.

Ghost transmitters and receivers can form a network, without the need to use Bluetooth or wifi, and communicate between themselves without sacrificing critical control performance.

Clear channel scan with automatic channel assignment, auto-start DVR recording when the throttle stick is raised, and a bunch of other cool features planned for 2020.

qTee, a.k.a ‘Cutie’ antennas are center-fed dipoles, with integral balun to ensure no cable radiation, and without unexpected nulls in the radiation pattern.

Tip to Tip length of just 60mm, easy to install in anything from a Whoop™ to an X-Class quad

For use on sub-GHz bands, the ‘Red Ghost’ product line can be custom ordered for use on licensed bands from 140MHz to 1GHz.

Another advantage of running 2.4GHz instead of the more traditional sub-GHz frequencies for long-range is that 2.4GHz has no harmonics that can desensitize GPS receivers (which are in the 1.5GHz band), so GPS position fixes become more precise.