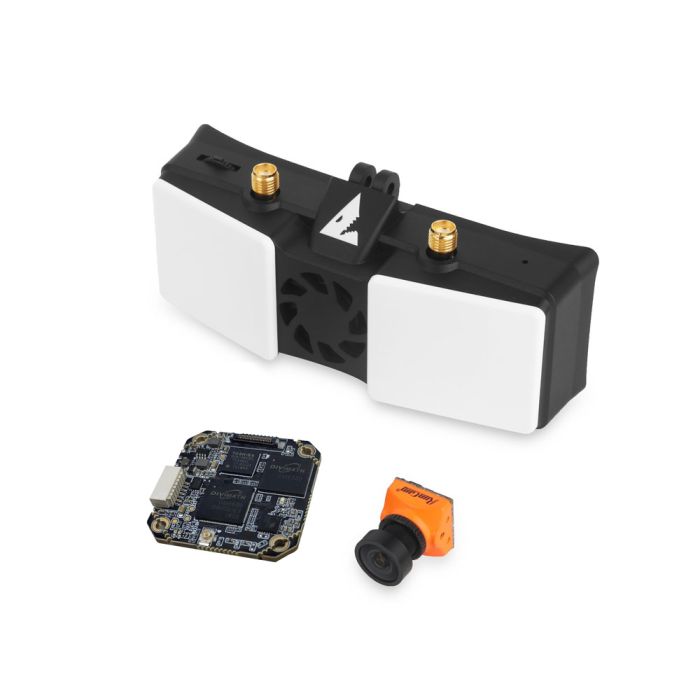 Shark Byte has a brand new compact goggle mounted module with integrated DVR and directional antenna. While mounted, the Fat Shark goggle can be seamlessly switched between digital and analog. Goggles can be even stored in their case without removing the digital module!

The goggle and module can both be powered by an existing Fat Shark battery* (with included balance lead adapter). For longer flight days, the system includes an XT-60 terminated adapter with a regulator to supply 8.4V to goggles and modules from standard 3S or 4S battery packs.

Image clarity has been improved with a new fully digital MIPI camera developed by RunCam; the RunCam Racer HD. The small 14x14mm footprint camera is suitable for the smallest of builds and comes with an adapter to facilitate mounting to larger frames. The camera has an OSD for custom tuning that can be navigated either by a button board or the radio control sticks (requires BetaFlight).

The transmitter size has been reduced and now uses standard 20x20 mounting holes. Power has been upped to 500mW and can be initiated in a standby mode that bumps to full power only when the quad is armed. The transmitter and quad PID settings can be navigated with radio sticks via an OSD or programmed using an external button board.

DO NOT use 5S or 6S batteries to power the VRX or headset. If you connect a 5S or 6S LiPo Battery to the VRX it may cause permanent damage.

The VRX and Fat Shark goggles do not include a low voltage alarm. Always check the charge status of your batteries before flying and never fly on low batteries. We recommend using an in-line battery alarm (not included) between the battery and DC cable

Suggested Antennas to Add (not included)

The Shark Byte system needs additional 5.8GHz antennas to operate. The RX Head unit includes 2x patch antennas built in, but have 2 additional SMA ports on top for 2 more antennas. The VTX unit has an MMCX port and needs an antenna on the transmitter side. We suggest using the Lumenier AXII antennas for the best performance with the Shark Byte system.