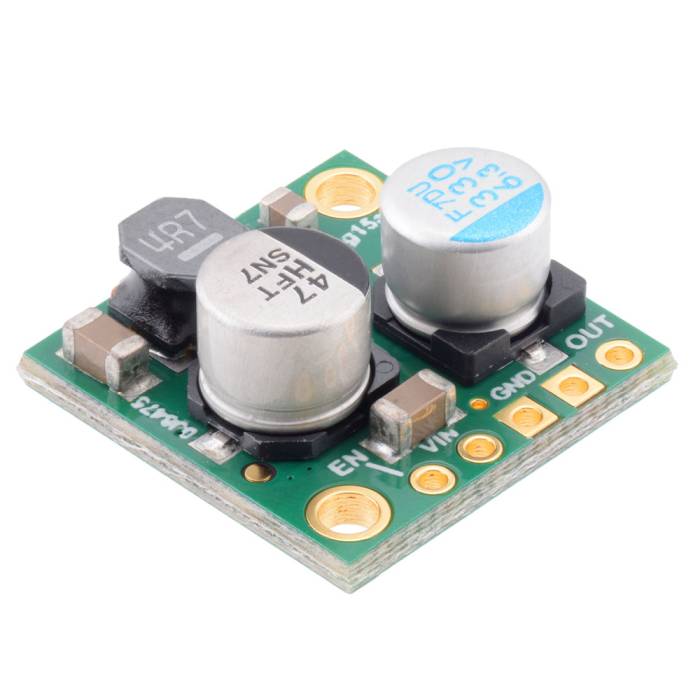 The D24V25Fx family of step-down voltage regulators generates lower output voltages from input voltages as high as 38 V. They are switching regulators (also called switched-mode power supplies (SMPS) or DC-to-DC converters) with typical efficiencies between 85% and 95%, which is much more efficient than linear voltage regulators, especially when the difference between the input and output voltage is large. The available output current is a function of the input voltage and efficiency (see the Typical Efficiency and Output Current section below), but the output current can typically be as high as 2.5 A.

At light loads, the switching frequency automatically changes to maintain high efficiencies. These regulators have a typical quiescent (no load) current draw of less than 1 mA, and the ENABLE pin can be used to put the boards in a low-power state that reduces the quiescent current to approximately 10 µA to 20 µA per volt on VIN.

The modules have built-in reverse-voltage protection, short-circuit protection, a thermal shutdown feature that helps prevent damage from overheating, a soft-start feature that reduces inrush current, and an under-voltage lockout.

The regulator is enabled by default: a 100 kΩ pull-up resistor on the board connects the ENABLE pin to reverse-protected VIN. The ENABLE pin can be driven low (under 0.6 V) to put the board into a low-power state. The quiescent current draw in this sleep mode is dominated by the current in the pull-up resistor from ENABLE to VIN and by the reverse-voltage protection circuit, which will draw between 10 µA and 20 µA per volt on VIN when ENABLE is held low. If you do not need this feature, you should leave the ENABLE pin disconnected.