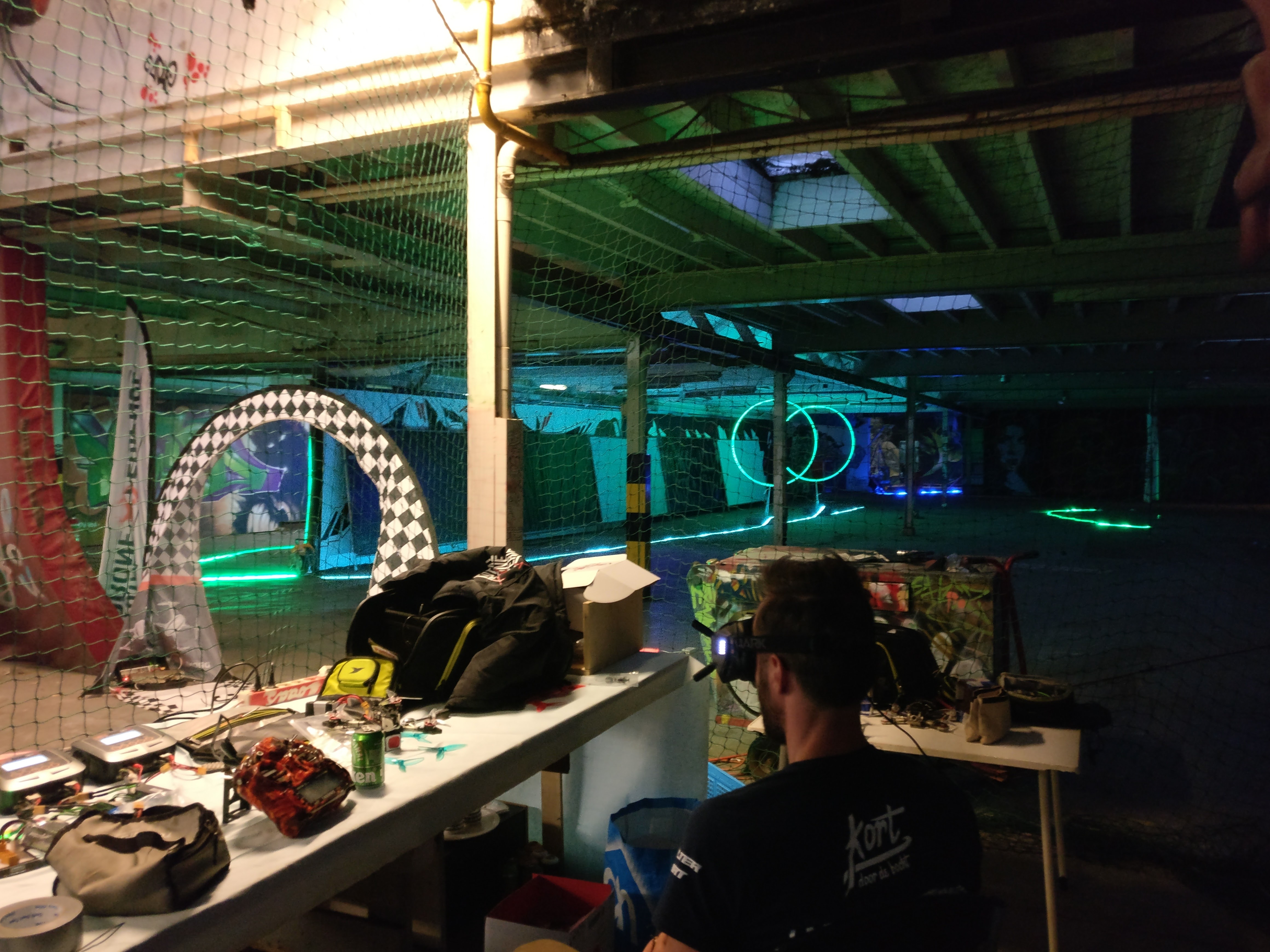 Not long ago, DJI burst onto the FPV scene with a revolutionary set of goggles and video transmitter that transmitted an HD picture digitally. It took the predominantly analog FPV community by storm with equally impressive image quality and transmission range. While many freestyle pilots immediately adopted the system, groups quickly found challenges on the race course. The digital transmission interferes with other pilots’ video feeds, timing systems struggle to capture laps, and it’s very expensive to get equipment that allows DVR recording and streaming.

A schism began to form among racers. Organizers argued that the challenges made it impossible to hold an event that was fair to all participants. Event managers at the top tiers of the sport have declined to rewrite established practices and purchase equipment to support the specific nuances and needs of the DJI system.

The visual clarity and immersive racing experience that digital video provides are enough to push other organizers to look for solutions. Kelvin Williamson in New Orleans and Erik Borra from the Netherlands are two of the finest race directors currently wecloming DJI digital FPV to their races. I caught up with them to find out more about the experience of racing with digital video and how their race groups are overcoming the challenges.

Aside: the DJI FPV Drone

Before we go further, one thing you won’t find out on the race circuit is the DJI FPV drone. This confusingly named drone is not popular with racers because it breaks easily when traveling at speed. When pilots are racing with the DJI digital FPV, they use DJI FPV goggles and a compatible camera/video transmitter mounted on a drone that’s customized specifically for racing. Some examples are the iFlight Titan and Flywoo Vampire.

GetFPV: Can you tell us a little about you and your race group?

I go by the pilot handle “KWBOOST.” In the summer of 2015 I got my first FPV racing drone and a set of premium Fatshark goggles. I quickly became acquainted with other FPV enthusiasts in the New Orleans and surrounding areas. I organized my first race in October of 2015, and by December, I was a co-organizer in starting the MultiGP SELA FPVie chapter. Sela FPVie became a “Tier 1” chapter in 2017.

Over the last 5 years we have held almost 100 events. Ranging from simple tech days to major regional qualifiers. On average we have about 10-12 pilots at a regular race. But we have held events with more than 35 pilots. I compete as well as organize. In 2017 I competed in the national championship held in Reno Nevada.

I have been flying DIY drones for the last eight years. For about five years I have been directing training sessions and races in the Netherlands. I often work together with Total Drone Xperience. Three years ago we got together with the other race organisers in the Netherlands and started Platform Drone Racing (PDRNL). Together with Drone Events, Dutch Drone Squad (DDS), Multi Rotor Oss (MRO), and Team Blobfish we joined forces and shared experiences. As the chairman of PDRNL I drafted a national rulebook for races based on that of the British Drone Racing Association (BDRA) and got it ratified by all members. Last year, Platform Drone Racing also welcomed other Dutch drone racing organizations such as CTN Racing, Dronezone Breda, and The Drone Racing Federation (TDRF), and X-racers Soest.

GetFPV: Why did you decide to pursue DJI digital FPV racing?

Right away I was blown away with how polished the system was, immersive, and the amazing image. I couldn’t wait to race it. In my opinion, this is the way FPV should be. Crystal clear HD video, free from static and flickering.

The clarity of image, the range, the awesome performance in multi-path environments and the fact that one does not need an extra HD cam to share nice track footage were all things that convinced me to buy one. Also, as a race organizer I suspected many would buy this and I wanted to get some experience with the system in order to facilitate everybody that would come to our training sessions and races. 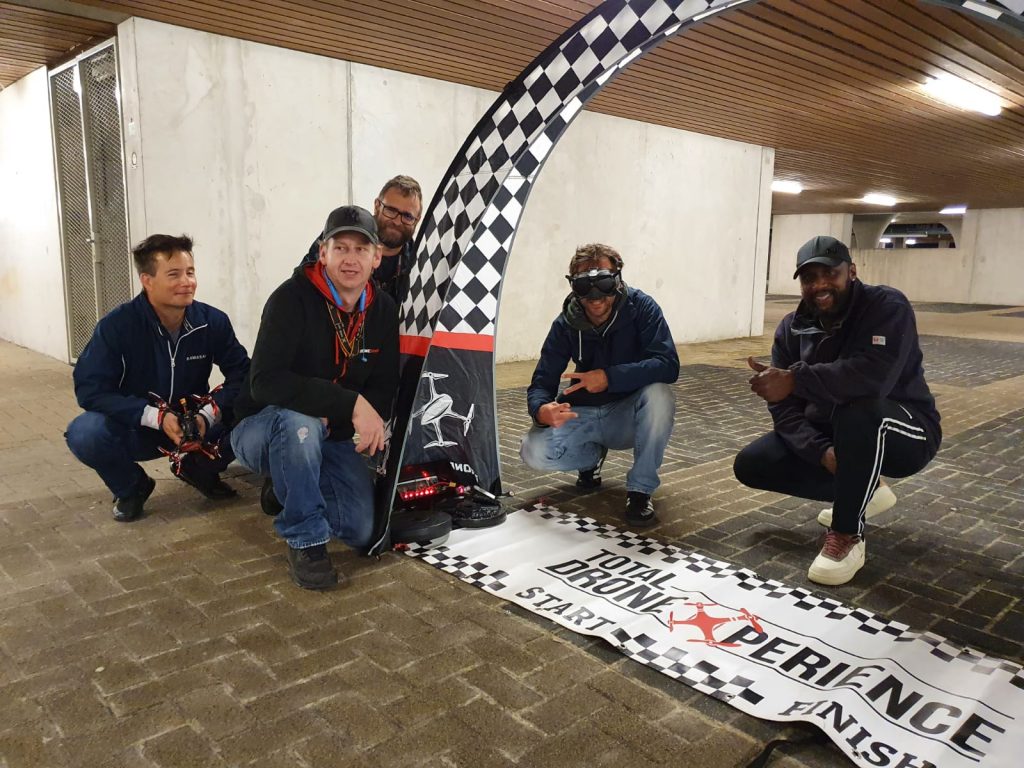 Innovations that are brought to the larger communities often work their way up from dedicated smaller groups of enthusiasts. Photo courtesy D’angelo fpv.

GetFPV: What challenges are unique to DJI digital FPV racing?

The goggles transmit as well as receive which can cause video transmission issues for other pilots in the pits. Also, a few of the DJI channels don’t match up exactly with FPV channel frequencies we normally use. Lastly, The DJI FPV system boots up on the public channel which is very close to R6. This causes frequent spamming on R6. Early on, the way the DJI system works caused some friction in our chapter. Some analog pilots were having Dji bleed over in their video feed. As well as DJI racers not happy that we couldn’t time their laps properly.

Consequently, there were quite a few hurdles to sort out. Timing being the most pressing issue. Like most MultiGP chapters we used the proven LapRF 8-way and puck. But they did not accurately or consistently pick up DJI lap crossings. Also, the ability to live stream with DJI is another issue.

GetFPV: How have you mitigated or overcome these challenges?

We heard from a few sources that RotorHazard worked well with timing DJI and analog. I was fortunate to acquire a RotorHazard timing system for our chapter to test out. I was very skeptical at first, but to my suprise, it worked great. RotorHazard timing DJI is just as robust as the LapRF 8-way timing analog. So with the largest hurdle solved we could now focus more on running races smoothly with analog and DJI.

Try to run separate Dji heats when possible. If you must mix DJI with Analog, Limit to 4 pilots in a heat to keep the airwaves less congested.

Always take complaints seriously, even if pilots whine. Make sure to have an ImmersionRC power meter to check VTx output power, and to have a screen that can be tuned in to one of the Raceband channels. If there are parallel white lines, that channel interferes with DJI. DJI has less problems with interference, although the image may turn ‘blocky’. 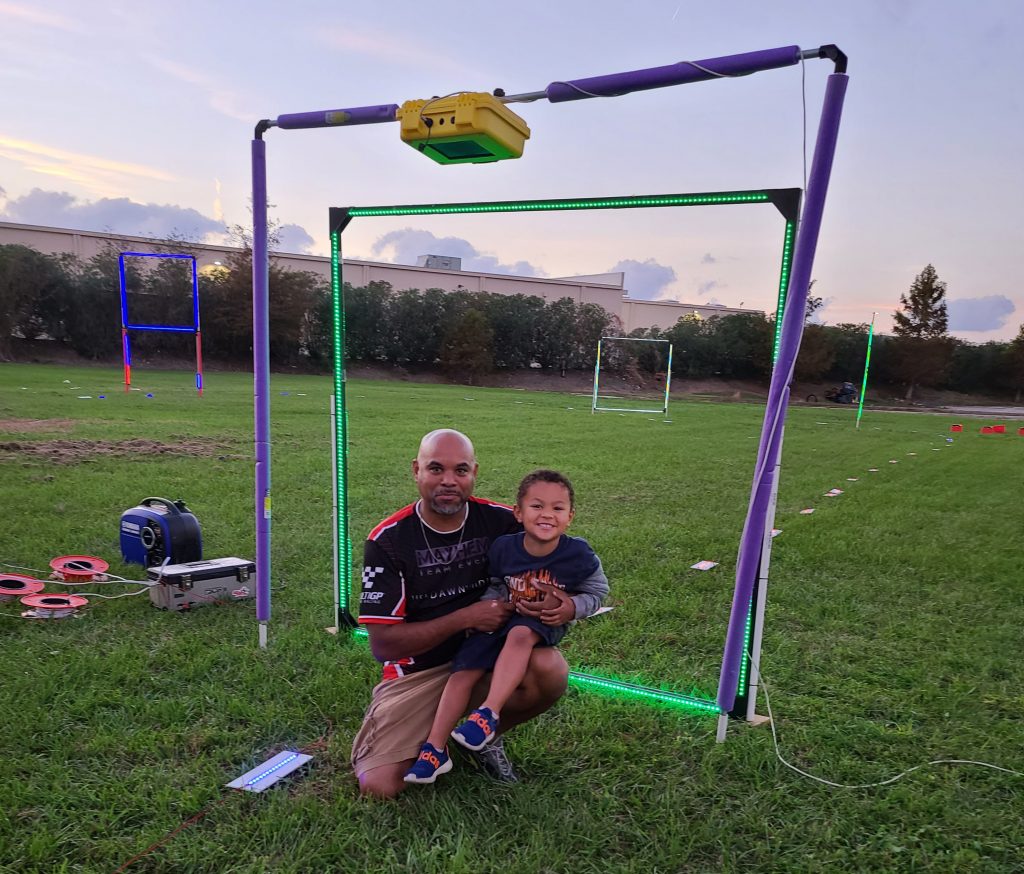 Kelvin Williamson of SELA FPVie in New Orleans shares his love of FPV racing with his son.

GetFPV: How is organizing and running a DJI digital FPV event different from a traditional analog race day?

It is actually much easier to organize DJI only races. Differing output power does not matter as much, people cannot just plug in and push somebody off their channel, it is easier in multipath environments. If there are analog quads involved, one needs to do more careful frequency management. At the onset it was hard to get correct lap timings. We eventually solved that by switching from Immersion RC’s LapRF 8-way to RotorHazard.

Personally, I fly with much more confidence since flying digital. We fly indoor a lot and on analog that is accompanied by a lot of glitches through multipathing. With digital I do not get those distractions anymore. Also, the spots were we used to fly have become much bigger, as the image stays clear for much longer (e.g. in garages, bandos, etc). Also, channel management is so much easier with DJI. It will tell you when the channel you want to plug in is already occupied, and you can fly with six to eight pilots easily. With analog that was limited to four max. 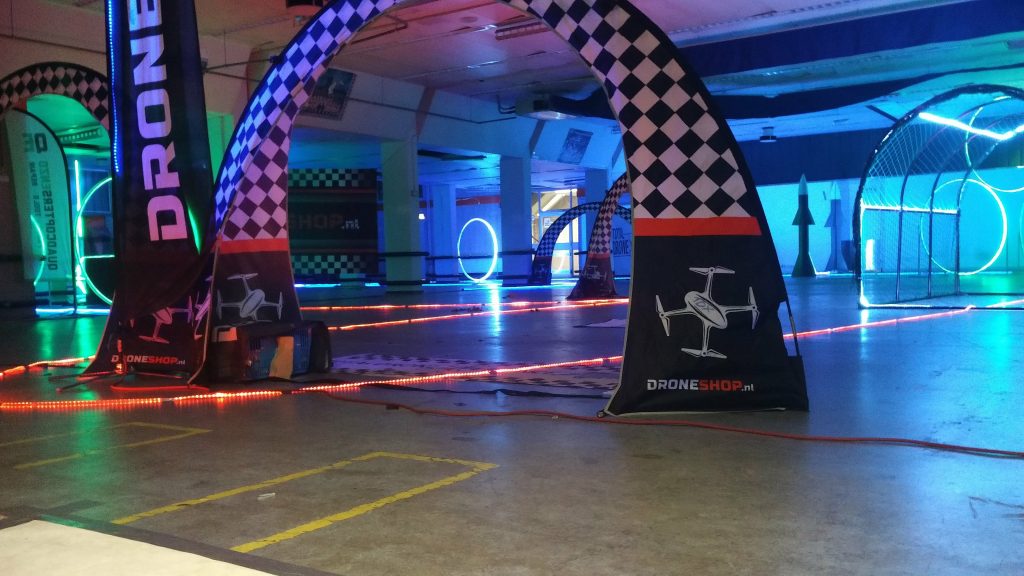 Racing at Total Drone Experience in the Netherlands puts multipathing rejection systems to the test.

GetFPV: Do you think there’s a path for DJI to become mainstream in the racing scene?

In order for DJI to become accepted in the top tiers of racing, it should make sure to have fixed low latency video transmission. The variable latency makes it unreliable for top pilots that need their quad to behave identical each time they pass a specific obstacle on the course.

While it is perfectly fine to have a spotter with DJI goggles in audience mode to check that a DJI pilot takes all obstacles correctly, for big races with events you want to be able to show it on screen. This currently means buying a smart controller for each DJI seat and that means spending a lot of money ($750 per seat).

DJI FPV is growing tremendously in popularity. Many new pilots in fpv racing are going to use the DJI system. The main issue preventing that right now is the ability to livestream the DJI transmission. That will probably be solved soon.

I don’t think we should stop racing analog, but, I hope to see a clear path set forth for racing DJI. This is a niche hobby. And it is in the best interest for the hobby that we, as organizers, work hard to make avenues for pilots with analog and HD to race.

Despite the challenges, Erik and Kelvin are out there having a great time with their race groups. Thanks to their efforts, some of the major issues have been solved such as lap timing and getting heats with mixed technologies in the air at once. But there still aren’t good answers for some of the criticisms of the DJI system, like live video feeds for DVR review and streaming. So far, DJI is the only manufacturer to make significant progress with digital video and the FPV community—but Fat Shark is still working on the Shark Byte system and promises to address DJI’s shortcomings.

During my conversations with Erik and Kelvin, I also heard a lot of specifics about race setup and management. We’ve also published a detailed guide on how to hold your own races with DJI digital FPV!