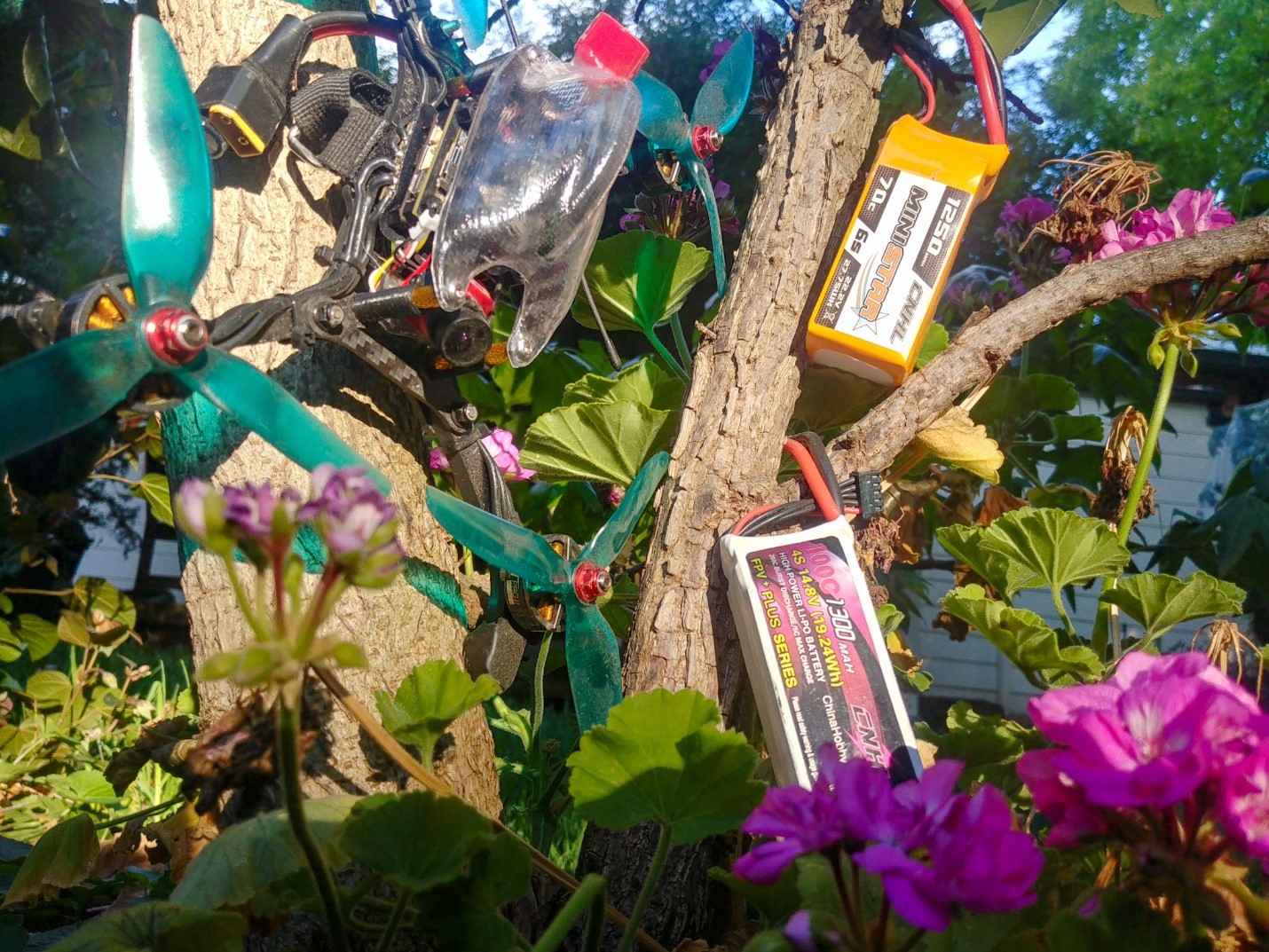 The physics of 6S batteries was covered in my earlier article on 6S vs 4S drone racing. To summarise the main points:

To switch to 6S, motors and batteries were the only components which needed replacing, along with adding a larger capacitor. Most manufacturers recommend using a 1000 micro-farad low ESR capacitor (or two more commonly available 470 micro-farad capacitors in parallel). My motor choice was the 1700kV Emax RSii 2306 motors. These motors had a similar top speed to my old 4S 2400kV setup. Many racers now are using motors up to 2100kV, or even 2300kV with throttle limits. Because of Betaflight 4.1’s release, I also decided to upgrade my flight controller and ESC to take advantage of the new RPM filtering features.

If any components are unable to accept a 6S battery, they will need upgrading. Most modern components are already 6S capable, but a quick check can save you a lot of money.  I would also recommend being wary and reading the reviews of certain low-end ESC’s claiming to be “6S capable”. These ESC’s will tolerate 6S however failures on under high loading (such as applying full throttle or not disarming in a crash) are common.

Upgrading to Betaflight 4.1, no major changes needed to be done to my setup. Commonly 6S setups can experience high frequency oscillations however this can be tuned out. Newer versions of Betaflight require little tuning for 6S however I always recommend looking at the developers release notes for the latest version of Betaflight. These notes can be found here.

Weight doesn’t necessarily need to change. My craft went from 280g to 290g however I elected to switch to a heavier ESC with a chunky heat sink to improve heat dissipation.

If you elect to use a battery of equivalent watt hours (capacity x voltage) to a 4S which weights the same, the overall craft weight shouldn’t change at all. Many pilots however elect to use a 6S drone battery of equal capacity to their old 4S drones meaning that the battery would be roughly 50% heavier (assuming that the C-rating and manufacture of the cells is similar).

There are essentially two types of 6S setups for racing. The first is designed to feel exactly like a 4S setup but with the more linear feel through the battery. The second is the power setup where bigger/ faster motors are put onto the setup to increase craft speed and power delivery. In this case, 6S packs would be worn at a near equivalent rate to aggressive 4S set-ups however the quad will just be higher performance.

Although most pilots elect to use similar sized 6S motors to their previous 4S setups (common sizes including 2306, 2207 and 2406), some pilots are also using smaller 6S motors. Smaller 6S motors (common sizes including 2205 and 2206) reduce craft weight yet maintain a similar amount of torque to larger motors run on 4S. My setup however used 2306 motors as I wanted a torque increase.

The most noticeable improvement was that the performance felt more linear throughout the battery. The ability for a 6S battery to deliver more consistent power meant that the top speed could be sustained for longer without voltage sag occurring. This made it easier to maintain lap time consistency over a single flight.

To further increase performance, many pilots have now opted to use 2000kV+ 6S drone motors. The downside to higher kV motors however is that the increased load they place on the batteries can cause voltage sags, like a high kV 4S setup.

Switching to a 6S drone, I did notice a flight time increase however this was expected. My flight times with a 6S 1250mAh battery went up by approximately 50% compared to a 4S 1300mAh pack. If you calculate the energy (in watt hours) each battery holds using ‘energy = voltage x capacity’, a 1300mah 6S has approximately a 50% energy increase over a 1300mah 4S as it has two extra cells. If using higher kV 6S drone motors, the flight time difference would be significantly smaller due to the higher power consumption.

Unfortunately, at the time of writing I did not have any 1000mAh 6S packs to test although the stored energy should have been comparable to a 4S 1300mAh pack. Although these batteries store similar quantities of energy, pilots have suggested that the 6S 1000mAh battery would last longer due to a lower current draw from the battery (but a similar power draw).

Using a 6S drone as a beginner can be an excellent way into the hobby. Whilst a 6S drone with a 6S battery, in most cases, would be quite overpowered for a beginner, a 4S battery on a 6S drone would not. The lower voltage battery would reduce the maximum motor speed, slowing down the drone to a manageable pace. This would also be a cheaper entrance into the hobby in comparison to purchasing multiple drones. This would mean that the 6S drone could be kept for longer before the pilot becomes limited by its performance.

Do I Still Believe 6S is The Future?

6S has a few advantages over 4S as mentioned in this and my previous article. After all this comparison, do I still believe that it is the future of the hobby? My answer is yes. With my setup, it made the battery discharge feel more linear and similar though the flight. I think 6S has its applications. Large fast tracks are where 6S will dominate, especially if there is an element of endurance. On tight tracks, 6S becomes less advantageous over a 4S drone, especially if the drone weight is more. Observing the switch to 6S throughout the community, it is also apparent that many pilots also believe it is the future.

Upgrading to a 6S setup can cost a lot with motors and batteries being the most basic requirement. You’ve got to make the decision whether it is worth upgrading or not. It is best to base this decision off where you would be using the 6S setup. For racing, it depends on the track. For endurance racing, 6S would be ideal as more flight time can be achieved without strongly noticing the weight. Tight courses would be the scenario where 6S wouldn’t make a big difference. On a freestyle setup, the upgrade depends mostly on how you fly. If you fly smoothly and slowly, a 4S battery could be ideal however a throttle limited 6S could also work. For highly acrobatic freestyle flying, 6S may be the way to go. The best advice I can give is to give 6S as try and see how it feels to you.