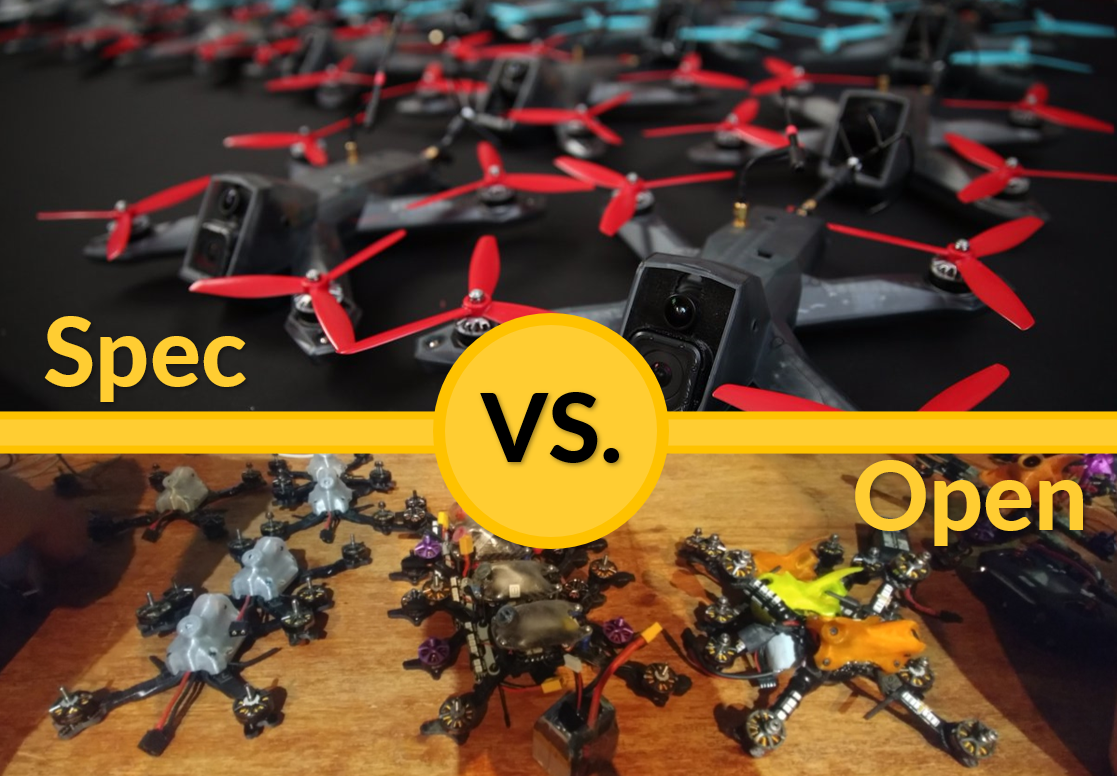 What is a Racing Class?

Open FPV racing class is currently the most common in the hobby. It is defined by a loose set of specifications including; 5”-6″propellers, a six-cell battery limit and a maximum frame size (~250mm diagonally from motor to motor). Different leagues may use variations of these regulations however they are the fundamentals. Open class drones are insanely fast and agile. The open nature of this FPV racing class allows for a lot of development and innovation. Racers will commonly modify their open class drones for speed, durability and agility.

Specification or ‘spec’ racing defines an FPV racing class with very strict design rules. Usually, restrictions are placed on the motors, frames, software or in some cases, the entire drone. Depending on the racing league, the strictness of the specifications can vary. An example of a spec FPV Racing Class is the Drone Championship League (DCL) where there are quite strict specifications. The Drone Racing League (DRL) is an example of a fully spec racing League where the only difference between crafts are the LED colours and the pilot’s camera angle choice.

Comparing spec racing and open, there are a series of points regarding each class and its advantages. The main discussion points include:

The main argument for spec racing is that it can be more competitive than open. Open class allows for pilots to experiment with setups to determine the fastest, most reliable, or most durable. In certain scenarios, a pilot can gain a significant advantage with a more extensively developed craft. Specifying a list of approved components reduces the room for development making racing more about skill rather than who has spent the most on their drone. Look at a Formula-1 race compared to a Formula-2 race where the cars are standardised. Personally, I find Formula 2 races can be more entertaining to watch as the drivers must continually fight for position rather than similar race results for the entire season. A spec FPV racing class would have similar results as the main performance gains would come from the pilot. Standardising components also means that you don’t necessarily need to be an engineer to experiment with and find a good setup. Depending how far you want to go, the firmware settings could even be standardised. This would further remove the difficulty in building and tuning for first time pilots. This would also be beneficial for beginners as it is not a quick task to familiarise yourself with tuning, especially considering the level of complexity which Betaflight has reached.

Implementation of a spec FPV racing class also has the potential to lower the entry cost into competitive racing. A top tier open class 5” race quad can cost in excess of $300. For some, this is quite a hefty price to pay, especially when you purchase or build several backup quads. A spec FPV racing class can lower this cost by specifying cheaper components or organising a bulk purchase order with manufacturers. I think this would be a good thing as there are many aspiring pilots without much to spend on the hobby or without a major sponsor as many of the pros have. Spec also guarantees that your quad will be competitive rather than having to experiment with different setups to find the most competitive. This is great for beginners who don’t have the experience of picking top tier components for an open class series.

In general, a spec FPV racing class is usually slower than the comparable open 5” class however this is not necessarily a bad thing. Slower drones allow pilots to make significant lap time gains from improving their lines rather than spending more on quad hardware. For example, just by practice, you can easily knock half a second or more off a double gate. From my experience, there is potential to take this element at full throttle like a fast corkscrew if you can work out the correct stick movements. This continuous motion is a lot faster than my initial technique of taking it more like a series of zigzags. Slower drones make the racing about precision and consistency rather than just ‘sending it’. I must admit, there is a lot of fun in ‘sending it’ on the last lap to try and overtake the leader. If you can fly a 5” open quad with precision and consistency, then you can expect to be quite competitive in in a spec FPV racing class. Slower racing also has the added advantage of putting less strain on components, reducing the chance of damage and increasing battery, ESC and motor longevity.

One of the main advantages of a spec FPV racing class is that the closer racing makes it more entertaining to watch. Drone racing has seen a few rising leagues which are televised or live streamed. The most popular of these, DCL and DRL both use spec drones. Comparing these leagues, DRL drones are all identical however DCL drones have specific regulations which are tighter than open class. These regulations include mandating LED strips for increased visibility and an action camera mount. At the 2018 FAI World Drone Championship, the regulations forced competitors to run a high definition video link on top of their craft. This highly increased the audience engagement as the race could be viewed through these high definition feeds or from track-side cameras. Due to the weight addition, open class pilots usually will not run action cameras or HD video streaming links.

The main disadvantage I see with most spec FPV racing classes is the removal of a need for development. Racing is an incubator for development and spec racing effectively removes this aspect from the sport on an individual level. This makes it harder for pilots to gain an advantage from anything but skill. Spec Racing is essentially testing for skill rather than skill and knowledge. Currently, there isn’t a racing series focused on development only however the Lockheed AI drone racing challenge comes to mind as the challenge involves spec drones competing against each other to test for the ideal autonomous pilot programmed by a team.

Another point against spec racing is that it can force anti-competitive market behaviour. Forcing pilots to use specific components creates artificial demand. This is beneficial for the spec class suppliers however it reduces the sales of other companies. There is nothing wrong with this for small spec racing series however imagine what would happen if there was a popular global spec league specifying the use of exclusively one companies gear. That company would generate a lot of revenue however this would be at the expense of other companies. A competitive marketplace is a good thing as it pushes innovation forwards. An anti-competitive market led by a single company removes the need to constantly innovate as the company only has its existing products to compete with. For the company, having all the market share would be favourable but for the consumer, it is important that the industry market share is diversified across a few companies.

As far as hobbies go, drone racing is still quite new, only gaining most of its traction in the past five years. As the hobby evolves, new technologies are integrated into it and the drones continue to perform better and better. A drone with components and firmware from 2016 will perform noticeably worse than a drone from the present. Implementing a set specification for years to come would not be wise as it would halt racing development. Spec leagues would have to allow for software updates or update the specifications of their drone every year or so to accommodate for component development and availability. These yearly updates wouldn’t need to be significant, perhaps just additions to the list of ‘approved spec components’. This would ensure that spec classes remain current yet still highly competitive.

A New Idea for Spec Racing

Going back to motorsport, there is a low-cost sport called folk racing or alike. The idea is that after the event, the judges or competitors can buy anyone’s vehicle for a fixed price (usually within the $500-$2000) range. The concept is that it prevents competitors from overspending and keeps the cost of the sport low. This is an inherent problem with drone racing as top tier open FPV racing class drones seem to be continually rising in price. Implementation of a ‘folk’ class in my opinion would be a great challenge. Tech heads would get the fun of building and developing, beginners can buy a bind and fly (BNF) craft, and the price of competing remains at a fixed affordable level.

As discussed, spec and open FPV racing classes have their pros and cons. Spec racing is gaining popularity and is quite a viable racing series. In my opinion, I see spec racing as a complimentary series to open racing rather than a replacement. Currently, my club doesn’t have a spec class however when it does, I will be sure to compete in it.