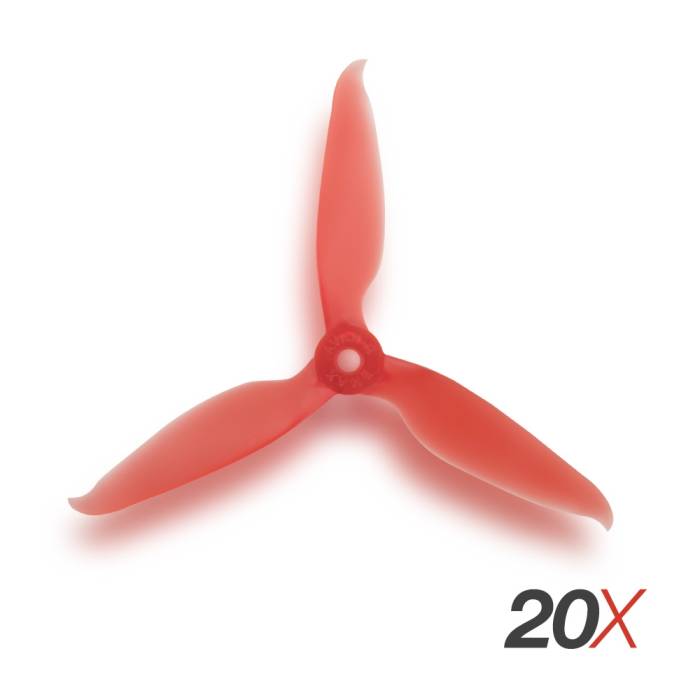 Notify me when this product is in stock
EMAX AVAN-R 5x3 Propeller (Set of 10CW, 10CCW - Red)
Each propeller was designed using custom Computational Fluid Dynamics (CFD) software. This CFD builds up the aerodynamics around a propeller using a Vortex Lattice Method including viscous and compressibility effects.

The Avan propellers are designed from the ground up to match your equipment. Each propeller is designed to match the power curve of current motors on the market. This gives the propellers a linear throttle response, great low end control, and incredible top speed. The matched power curve allows efficient transfer of power across the throttle band.

Each propeller was designed using custom Computational Fluid Dynamics (CFD) software. This CFD builds up the aerodynamics around a propeller using a Vortex Lattice Method including viscous and compressibility effects. This allows for an accurate performance measure in the design phase. Optimum design is chosen based off the Betz condition for a set design point. The design point is described as diameter, number of blades, speed, rpm, flight angle, and design thrust. The CFD then draws the optimum chord and blade angle distribution (Beta) along the radius to be the most efficient at that design point. This is done by modeling the shedding vortex filaments off each radial section along the blade and making them all shed off in a perfect rectangular screw (Betz Condition). Once the optimum design is set, performance is modeled across a range of speed and rpms (Advance ratio). With power and thrust known for all advance ratios, it is checked against the performance curve of the intended motor. Design conditions are then adjusted to utilize the maximum power available at each rpm from the performance curve of the set motor. This is then analyzed at different throttle positions, favoring the mid throttle range the design conditions are set.

With the set chord and blade angle distribution, the propeller is modeled in CAD. Finite Element Analysis (FEA) is performed on the blade for different load conditions. Based on the stress distribution thicker or thinner airfoils are chosen along with the blade and hub interaction. If the airfoil is changed, the CFD analysis is redone and a different chord and beta distribution is found and this process is repeated. FEA is also used to analyze the frequency response of the design. A material is chosen that adequately pushes the first vibration mode away from typical motor resonance frequencies.

The Avan-R propeller is a triblade designed for the racer. Expect incredible top end speed with great low end control and a locked in grippy feel. The Avan-R has a design advance ratio of .65 with a 5.0 inch pitch at 75% of the radius. The Avan-R has a weight of 5 g and a moment of inertia of 34 g/cm^2 Specifically designed to match the power curve of the Emax 2306 2400kv motor. The optimum design point for the Avan-R is at 70 mph at 45 degree flight angle, 16000 rpm, with an all up weight expected around 650g. This design target is right around half throttle. The Avan-R uses airfoils that achieve high lift coefficients which expands its stall range and ultimately its efficiency range. This propeller utilizes all the torque available from the Emax 2306 2400kv motor giving extreme responsiveness and efficient transfer of power.

The Avan-S propeller is a dual blade designed for top speed with high rpm set ups. This propeller is designed to match the power curve of the Emax 2306 2750kv motor. The Avan-S has a design advance ratio of .75 with a 4.2 inch pitch at 75% of radius. The Avan-S has a weight of 4 g and a moment of inertia of 25 g/cm^2. The Avan-S uses airfoils capable of achieving higher lift coefficients at lower angles of attack to achieve more speed with less blade angle necessary. The Avan-S has a design point of 110 mph at 30000 rpm at 80 degree flight angle. This is close to a full throttle design with lighter aircraft being able to go faster. Expect to push well past 100 mph just on 4s.